“Vorsprung durch Technik” – is a slogan that Audi invented. In my opinion – it’s marketing BS. What can You do – every brand needs a motto. But it actually fits perfectly to Soichiro Honda and this particular story… a man that had a dream and wasn’t afraid to pursue it, long before this German manufacturer. The story of big enterprises is usually surrounded by various urban legends and stories. It’s also the case regarding Mr. Honda…

In 1954 Soichiro was visiting Isle of Man during the famous Tourist Trophy, which at the time was included in the Moto GP series. It is told that he promised himself back then, that his products will win this race someday. We’ll probably never know if this is actually true, but… the fact is that Soichiro was thinking big. His company was quite small at the time, only just starting to rise from the turmoil left by WWII. 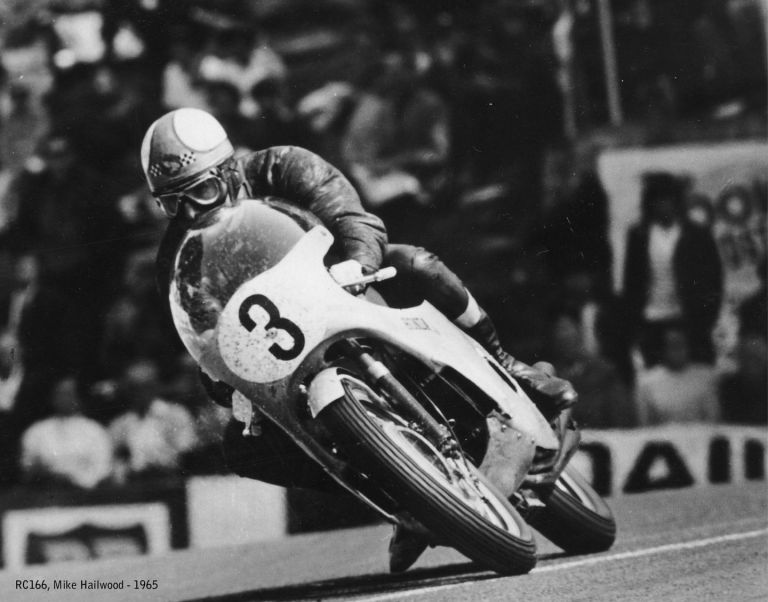 In 1961 Ernst Degener, engineer and driver of the MZ brand (originated in DDR), decided to use the Grand Prix as the opportunity to flee the communist country. As a “get out of jail” card he wanted to use the designs and studies of his co-worker, who was Walter Kaaden. Walter was an engineer working on resonance in the exhaust system and devised profiles to maximize the engine’s efficiency. A groundbreaking tech, that revolutionized the performance of 2-stroke engines in his era.

Degener was quickly “discovered” by Suzuki and the Japanese racing revolution started. But Soichiro was sceptical of this approach. He didn’t like the 2-stroke engine concept, as he felt that they won’t work in real life, road conditions. And in the early 60’s he was already thinking about revolutionizing the market for motorcycles. In 1962 Honda managed to win championships in 125, 250 and 350 classes. A year later – 250 and 350. But in 1964 lost to Yamaha’s 2-strokes.

Soichiro had a decision to make 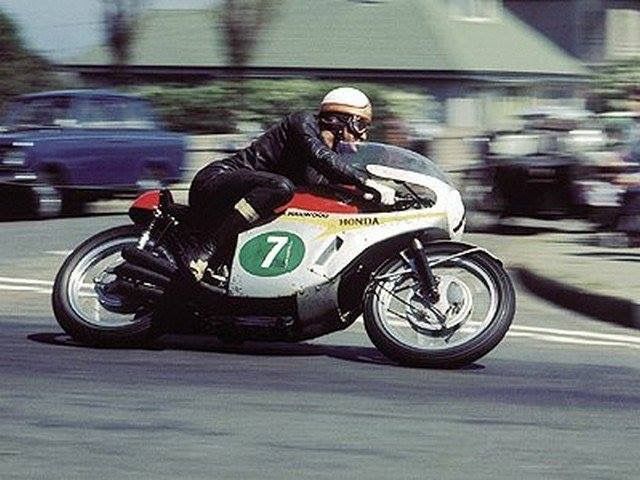 A young company like Honda had to make the best use possible of their limited resources. Not only to catch up with the competition but to beat them. The more difficult it had to be for Soichiro, to firmly stand on rejecting the way everyone else was pursuing. Leading his racing department to use 4-stroke: 3 or 4 cylinder engines. But this strategy failed in 1964.

On one hand – he had a precise expansion plan to conquer western markets – especially the USA, with road motorcycles. On the other hand – he knew, that the presence on the racing tracks was required, to build a name for Yourself. His scepticism against 2-stroke engines had a strong practical argument. Development of this concept was only effective on the race tracks. Experiences earned were difficult to transfer to road use, and as it turned out later, could have really threatened the most important motorcycle Honda ever made – the CB750. 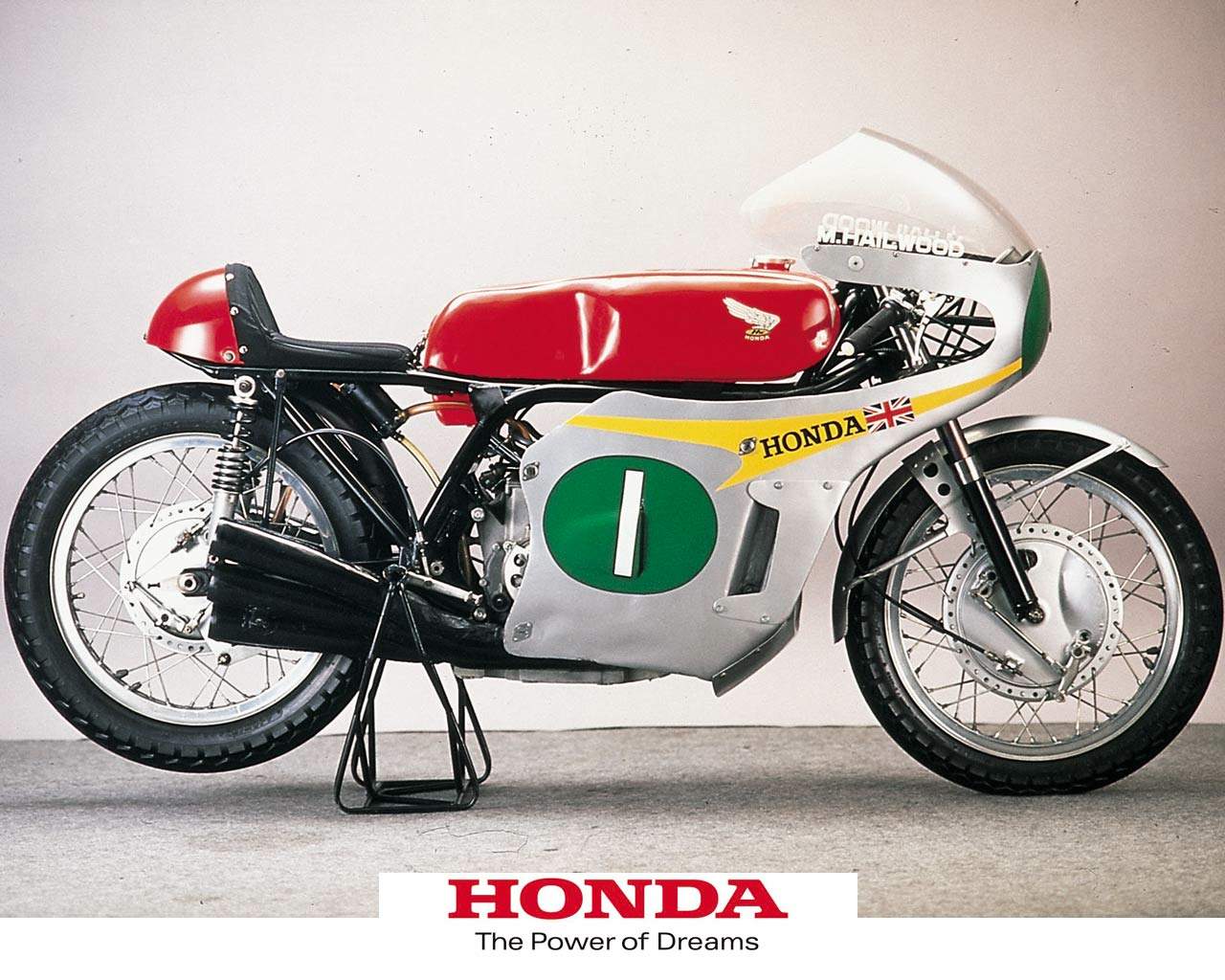 So in 1964, when the engineers opted to follow the way of the competition,

And ordered a new racing engine project, that would not be a 2-stroke. This task was put on a 24-year old engineer – Shoichiro Irimajiri. The pressure was enormous as Yamaha was beating Honda during every single race. Irimarji knew, that the biggest limitation of 4-stroke vs 2-stroke is that there is only one work cycle against two crankshaft rotations. This was something that You cannot change. So to overcome that fact – he found one solution – RPM! If You cannot change the frequency of the work cycle, You need to increase the number of cycles in a unit of time. Easier said than done. Since high RPM would obviously result in increasing the forces generated by the moving components, he decided to overcome it with “miniaturization”. Smaller pistons meant smaller inertia and better heat distribution. The goal was 18,000 RPM… Sounds impressive? Remeber – this is 1964 we are talking about.

At first glance – an impossible task 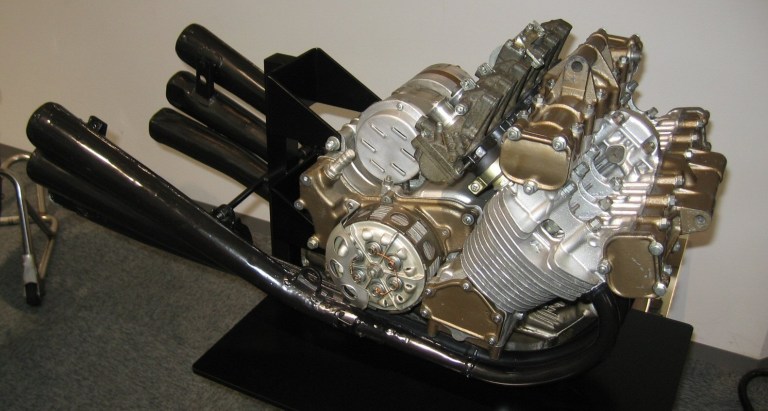 Irimarji knew that 4 cylinder engines won’t be able to achieve it – so he decided to go with 6 cylinders at 250cc. To stay in regulatory engine displacement – the piston diameter had to be 41 mm, and the stroke 33 mm. This resulted in single cylinder displacement at 41,6 cc. To such tiny combustion chamber, Honda managed to fit in 4 valves. Each one of them (in every single cylinder) was different than all the other! The reason for that was the shape of the camshaft, which had a larger diameter in the middle than on the sides – to keep the weight centralized for increased durability. 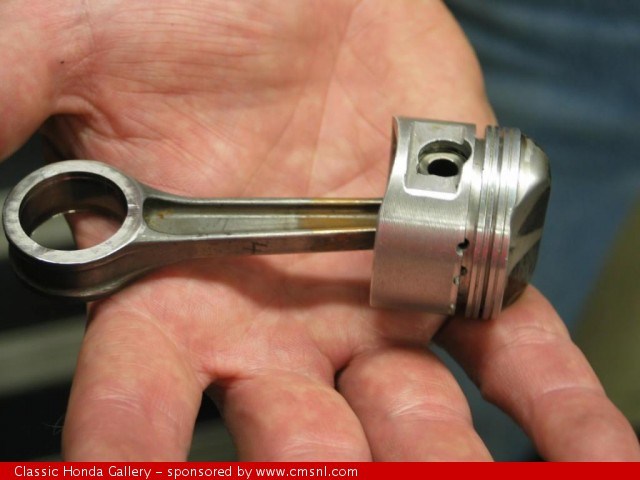 The crankshaft was built of 13 components. It was said to be so delicate that it could easily be deformed by hand, yet held up to the enormous forces exerted upon it when spinning 333 times per second. The engine didn’t have a flywheel, so the throttle response was instantaneous. This resulted in a problem since there had to be a limit to the way it revs or otherwise it would disintegrate, hence – the camshaft shape mentioned before. A way to tame the forces working inside the engine, fed by six 22-mm round-slide Keihin carburettors.

Some of the oil passages were as narrow as 1 mm 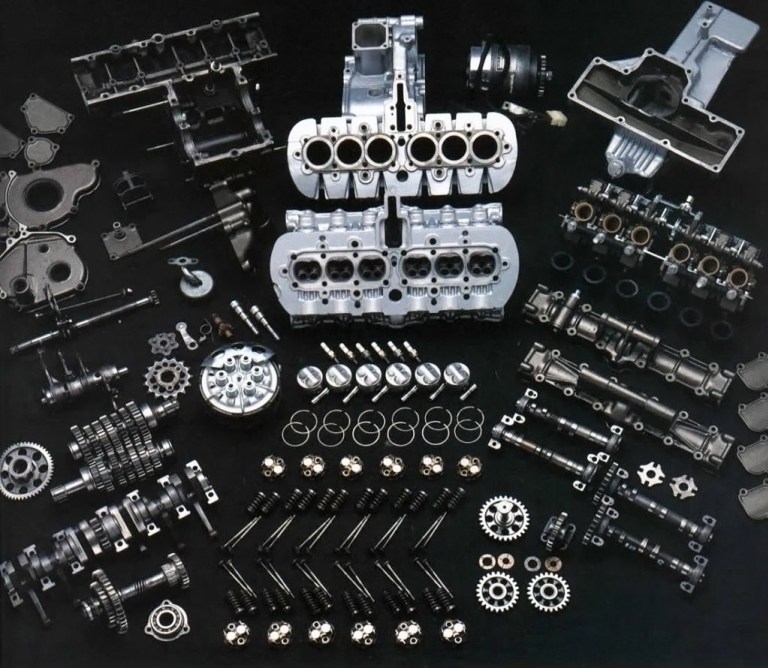 Every possible aspect was taken into consideration during the design phase. It’s simply stunning how it was possible to build without the support of computers and precise robots. As some of the channels and ports are only visible using RTG.

The new heart was ready for Monza, mid-season 1965. The team wanted to hide its new weapon. So they designed an exhaust that had only 4 tips, and the motorcycle was listed as a 3RC164. But all this scheme was busted once they started the machine. The sound of a 6 cylinder engine is impossible to mistake for anything else. Especially when only mechanics and racing drivers are listening 🙂

Unfortunately, there were issues.

The old suspension didn’t want to work with the new powerplant, which wasn’t very reliable. But it’s something to be expected in the early stages of track testing.

The first time the RC166 proved its worth was in Japan, where despite winning the race, they knew that Yamaha has the championship in their pockets. The real battle was about to start in the next season. Mike Hailwood was rehired by Honda team, after spending 4 years working for MV Agusta. Only after early tests, he instructed the mechanics to implement some modifications. The biggest issue was handling – so Honda team increased the frame length by 3,5 inches. The suspension was also changed. The rumour is that first front forks were thrown into the nearby lake, by furious Mike Hailwood. 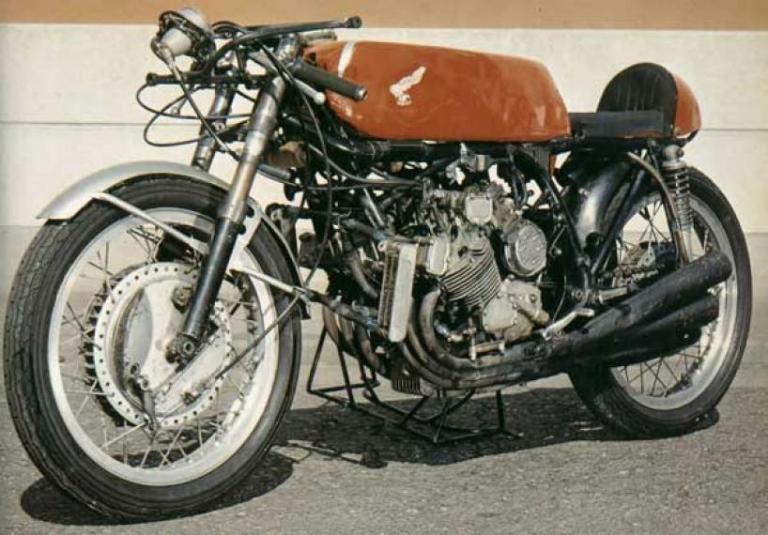 In 1966  Mike Hailwood, Jim Redman, and Stuart Graham started one of the most legendary seasons of Moto GP. Eventually – Hailwood won 10 out of 12 races in the season. Collecting 56 points. Read from Yamaha came second, with 0 wins and 22 points less.

The domination of Honda was total 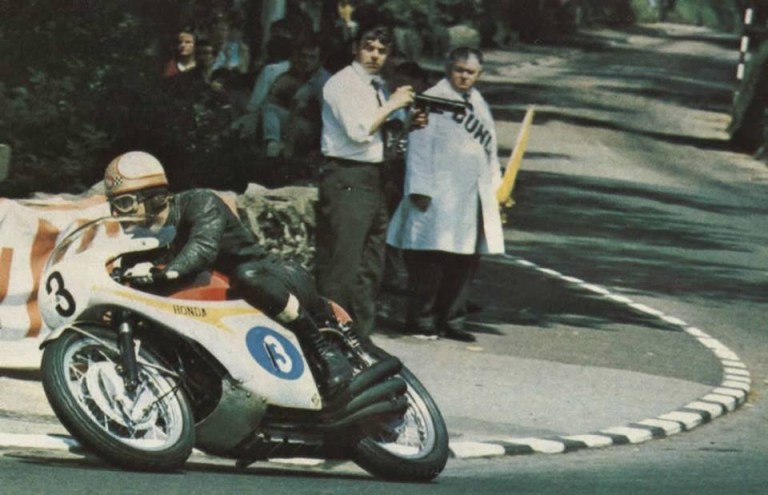 The teams using 2-stroke engines, had to complement Soichiro’s decision, that proved that there was another way.

In 1967 season – Honda repeated it’s success. But this time Hailwood won only 5 races – collecting 50 points, the same number as Read – riding for Yamaha, who won 4 races. Fortunately for Honda – the number of victories decided about the championship.

to focus on F1. Hailwood was left standing and was forced to race Honda unofficially, without a factory team. Since MV Agusta was completely dominating the grid, he decided to switch to car racing (with success). 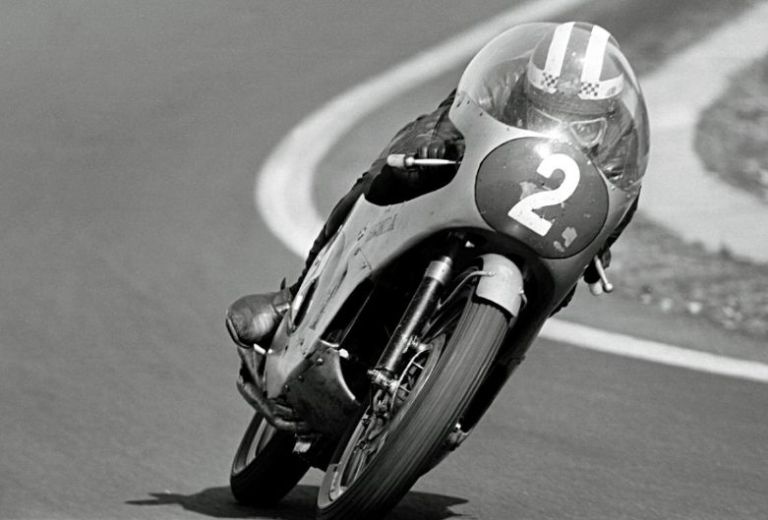 RC166 turned out to be one of the best and the most interesting motorcycles to ever had raced on the tracks. It was born in a young engineer’s head, a guy that was not afraid to think out of the box. It achieved it’s physical form thanks to true artists, who managed to work with a space tech precision. Supervised by a visionary – Soichiro Honda, who once dreamed about winning a TT Isle of Man race.