Classic motoring enthusiasts know that the golden age of cars was the 60’s. It’s hard to disagree. It’s back then when Jaguar E-Type was born, or a cult classic pony-car Ford Mustang. In the motorcycle world, the golden era would be the next decade – the 70’s. This is when the Japanese jumpstarted the technological revolution, which resulted in a birth of a road Superbike class. It wasn’t all unicorns and rainbows though.

Back in 1973, the first oil crisis came. It impacted the car industry the most, but motorcycle manufacturers felt it as well. Surprisingly it wasn’t so harmful to the big bike segment, but for the 2-strokes… that were quite thirsty. These days are also the time when the first emission regulations were put into place, that finally resulted in practically killing the 2-strokes on the streets. 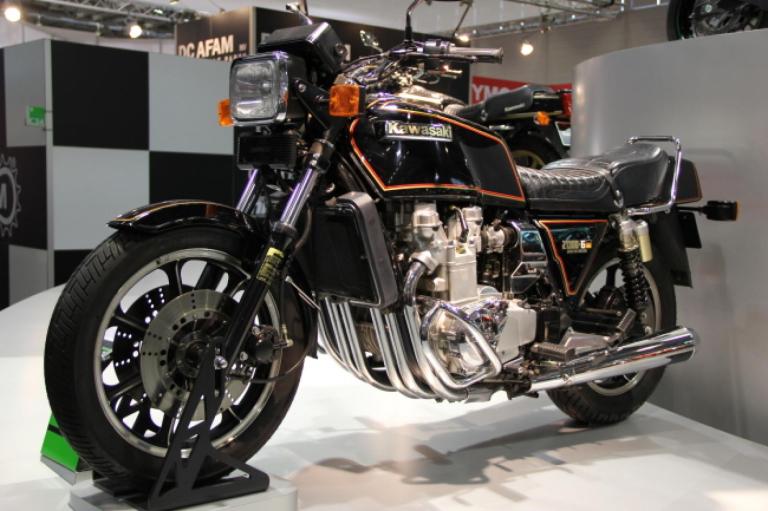 At the time Kawasaki on top of its sales folder had a 3-cylinder 2-stroke (500SS and Mach III versions) and a legendary R4 – the Z1. Both models were considered the fastest production motorcycles in the world. Right before the crisis came, the “Greens” engineers started working on a successor of Mach III, which was supposed to demolish everything the competition had with its performance figures. The concept was to create a 750cc, liquid cooled 2-stroke. Unfortunately, this concept was never finished due to geopolitical circumstances. So all bets were on the Z1, which with its R4, twin cam engine could still compete with any contender on the market. But the clock was ticking, and it was time to start working on something new. This is where the story of one of the most monumental motorcycles in history begins. 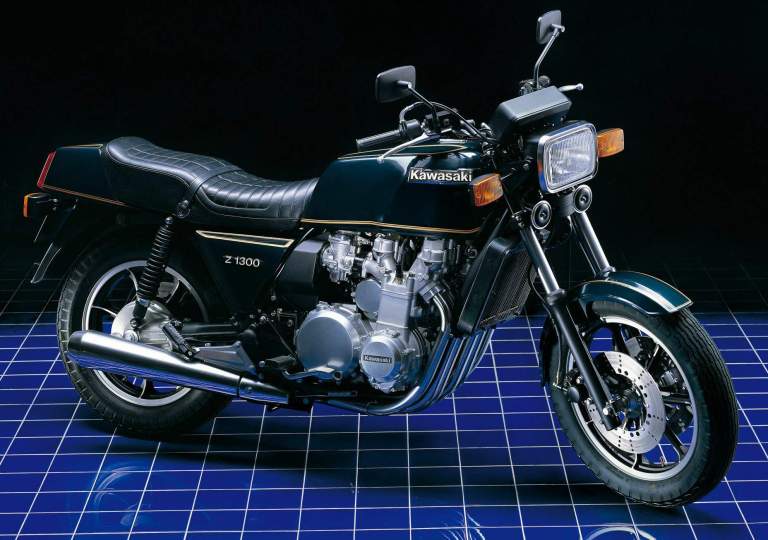 The work began in 1974. At the inception of the project – the vision was undefined. Kawasaki was exploring some unknown territory. Basic guidelines included: at least 1200cc and liquid cooling. The configuration of the cylinders was open for debate. Kawasaki USA proposed a V6 concept, the management after consulting with the engineers – decided that it was too expensive. While having just recently succeeded with inline four (with Z1 and Z1R), they opted for keeping the inline concept, as being the most reasonable and efficient… But they also wanted to have a show bike, a manifestation of their capability.

About the same time period, Benelli released a six-cylinder 750cc Sei model, that was supposed to outshine the Japanese (but was actually dangerously similar to the Honda CB Four engine). Honda was also working on an inline six. They already had a GL1000, propelled with a four-cylinder boxer engine. To beat these – Kawasaki needed something more spectacular than another R4. The decision was made. New Zet was about to have a liquid cooled inline six. 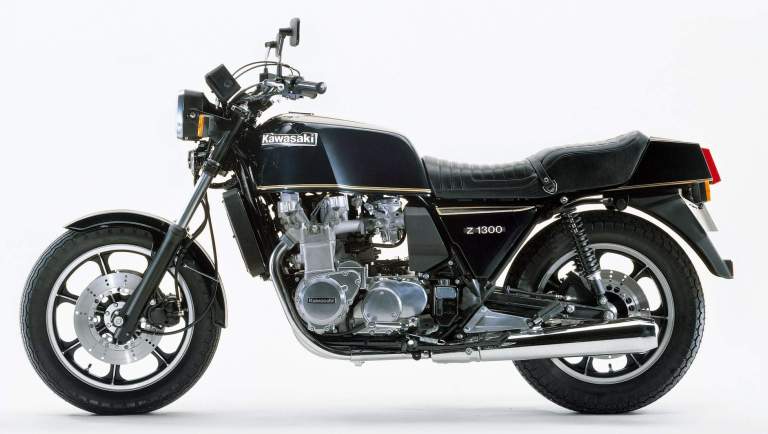 The work started obviously with the engine

Despite being a totally new design, experience from building the Z1 was utilized. The crankshaft was very similar to the one used in the four-cylinder brother. Clearly, it needed to be longer and strengthened – to be able to withstand higher forces. The cylinder head had 2 camshafts but had only 12 valves. The biggest improvement was liquid cooling. 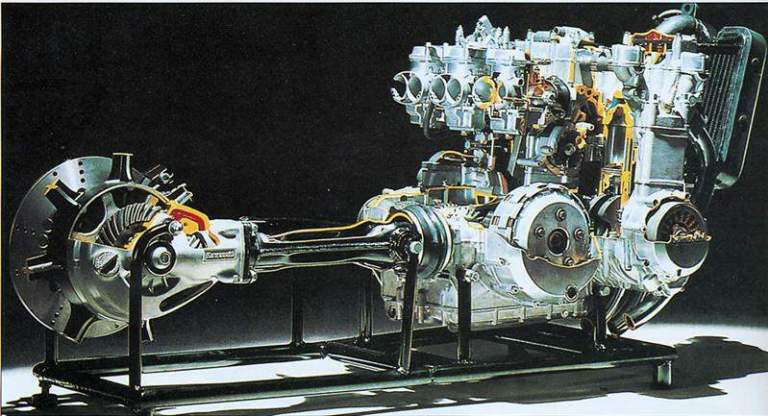 Regarding the suspension – there was no revolution planed. The motorcycle had a quite common steel cradle frame, which was connected with regular telescopic forks and steel swingarm, supported by twin rear shocks. Engineers strengthened many construction elements, so it would be able to cope with the size of the powerplant, which resulted in further increase of weight. And this was an issue – since weight is not good for the sports character they wanted the bike to have.

The next issue was the transfer of power to the rear wheel. There were no chains able to cope with projected HP figures on the market back then. So quite unwillingly – engineers needed to agree for the shaft drive (which further increased the weight). They didn’t do it in-house though – Isuzu was hired, a company that was quite experienced in this kind of mechanical solutions. 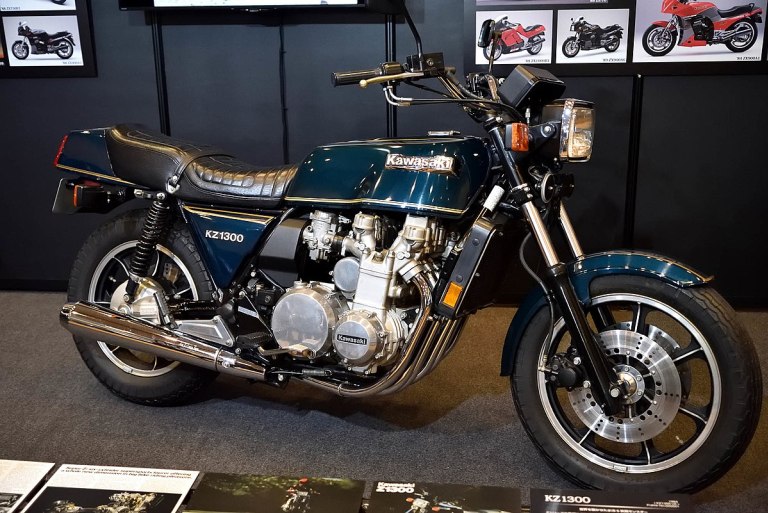 The first prototype was presented in 1976

It was significantly different from the version that actually met the market later. The stylists decided to go with a sporty vibe, with simple design and a bikini fairing. The key point here was obviously the big engine, painted silver which was the main point of focus. You could see that the rest of the motorcycle is simply built around it.

At the time the Z1300 project was taking shape, the competition didn’t sleep. But they didn’t pursue a sports segment, as the success of GL1000 proved that there is a huge market in the touring class. So the designers of Kawasaki had to follow this route also. They increased the tank size and capacity (up to 27 litres!), the seat was made bigger, and bikini fairing was removed. In 1977 Harley-Davidson released their Shovelhead engine, with 1340 cc displacement. So Kawasaki pressured by the US department was forced to increase their engine capacity to 1300cc (1286 exactly). It was all about perception. 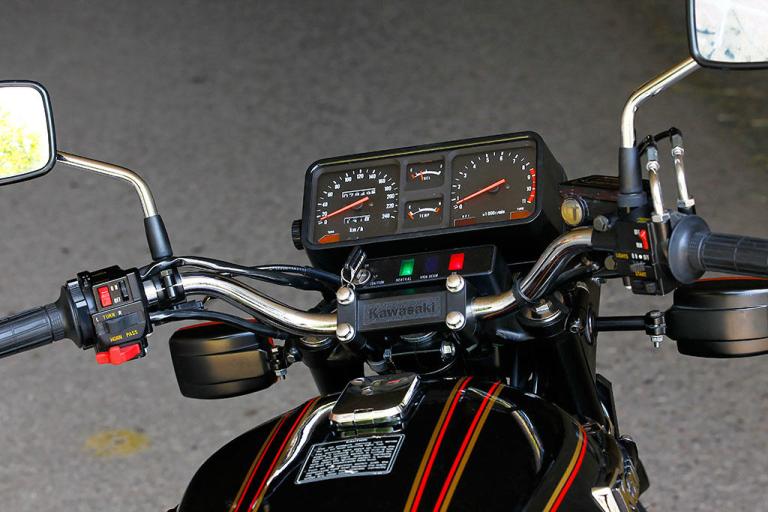 In March 1978 the production version was ready

The liquid cooled engine was producing 120 bhp and 118 Nm – these numbers have put Kawasaki Z1300 on top of the most powerful motorcycles in the world. Unfortunately, the weight was also on top of the scale – 297 kg is a number that puts the machine far away from its sporty aspirations. The direct competitor to Z1300 was Honda CBX1000, also powered by an inline six, but not as modern and 20 bhp weaker. The second rival was the GL1000, another one from Honda with a modern four-cylinder boxer, that would evolve into a GoldWing that we still have today. The only European representative – Benelli Sei, could not compete with the above. Its engine was way weaker and old fashioned. 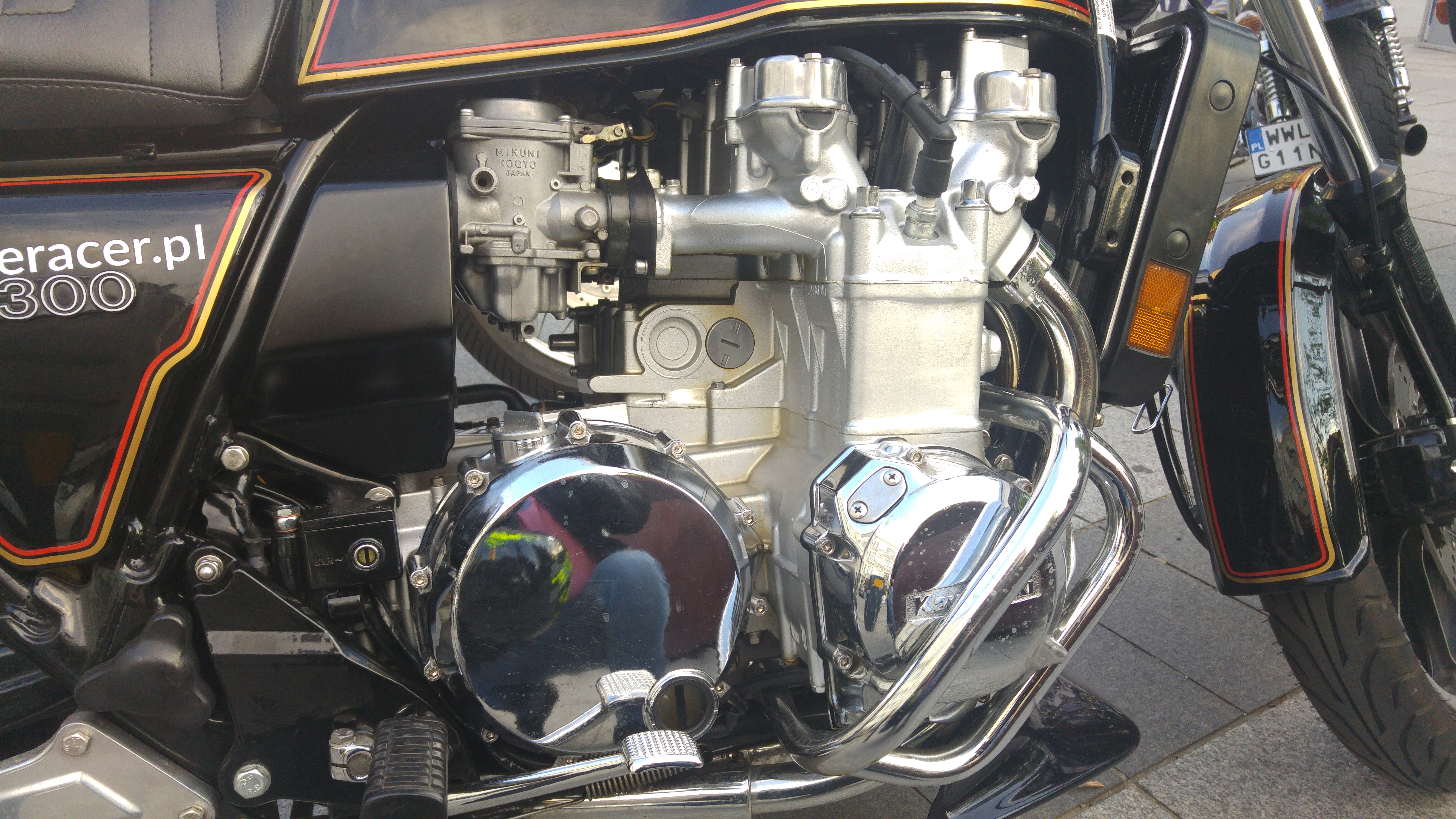 By the end of 1978 first pre-production machines were made available for testing. Kawasaki team tried hard to make the Z1300 handle well, but components available at the time couldn’t really cope with the engine temper and the weight of the thing. The reviews were fine, but the testers complained about the weight and were far from considering it to be anywhere near the “Sports” segment. The biggest impression was the way the engine delivered its power. 120 bhp with this amount of torque available, had no problem with moving the 300kg of metal. Z1300 was faster than Z1R and than any of its competitors. The build quality was good (something that was not always the case with Kawasaki). The first machines were released to the dealerships… which were not really packed with clients waiting… 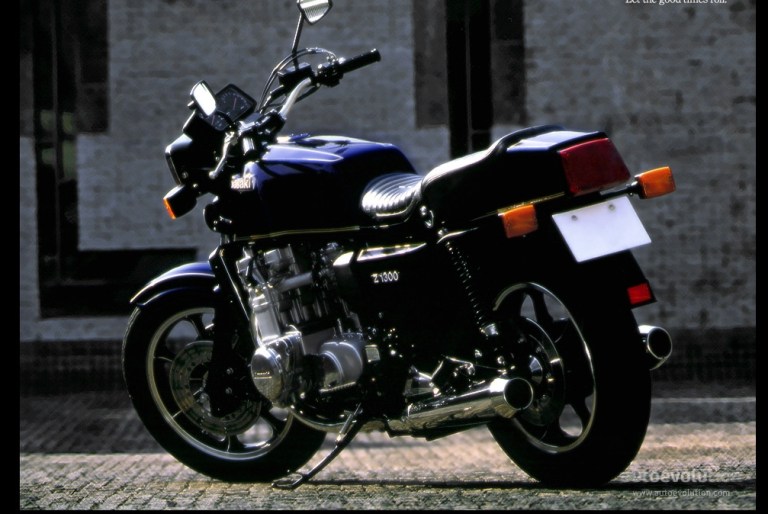 The price was quite high

Kawasaki was more expensive than Honda, what was not a common thing when You look at the history of these 2. Another point, that was scaring the clients – was the fuel consumption. And the last issue was fear for maintenance costs (a fear not justified at all). Kawasaki didn’t give up easily and tried to react to the client’s suggestions. While Honda gave up on CBX1000 in 1982, Benelli wasn’t really a competition, rather an exotic outsider. Kawasaki improved Z1300 with electronic fuel injection in 1983. The goal was to lower the appetite for fuel, the result was not really visible. But… fuel injection allowed the increase in the power output by 10, resulting in 130 bhp. Also the same year the ZN1300A Voyager was introduced. 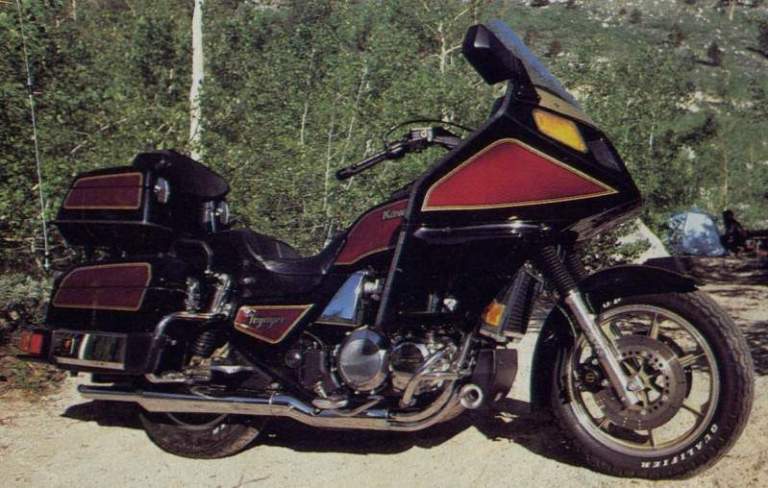 The dream about six-cylinder sports bike was gone. The overweight naked, while impressive and quite fast – didn’t manage to revolutionize the market. Voyager version was the last try to address the touring segment, following the success of GL1000, which was only offered with full fairing at the time. Z1300 got the same wind protection, side / top cases, and a big seat. You could also order the FM radio and an antenna. Yet Voyager sales figures didn’t impress. Until 1989 only 4500 were sold, the regular Z1300 – 20000 units. 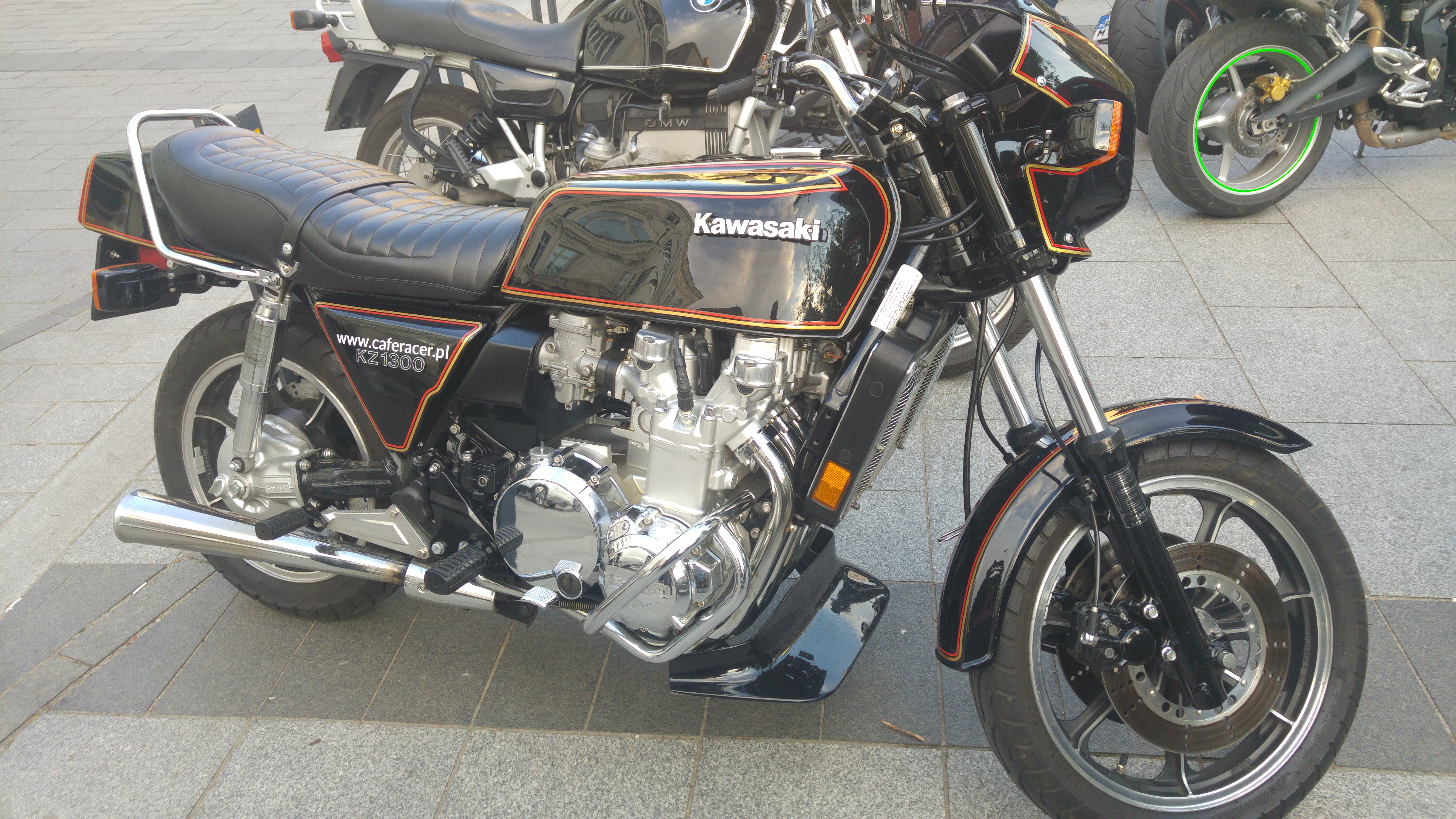 Six-cylinders in a motorcycle turned out to be a dead end (for a while). They couldn’t compete with smaller and only a little less powerful inline fours, mainly due to their cost and weight. Yet the market reception doesn’t change the fact, that Z1300 was the most sophisticated and most powerful of all 3 competitors. Not all ideas that seem brilliant on paper – actually turn out to be so. But does it change the statement that Kawasaki made with Z1300 in the golden era of motorcycles?