I was very interested when I read the press release for this bike, as I would have never imagined this kind of build and a reason behind the technical concept. The story reaches ten years back, right now it is in a critical moment – the project is counting on a crowdfunding initiative. It is truly a… 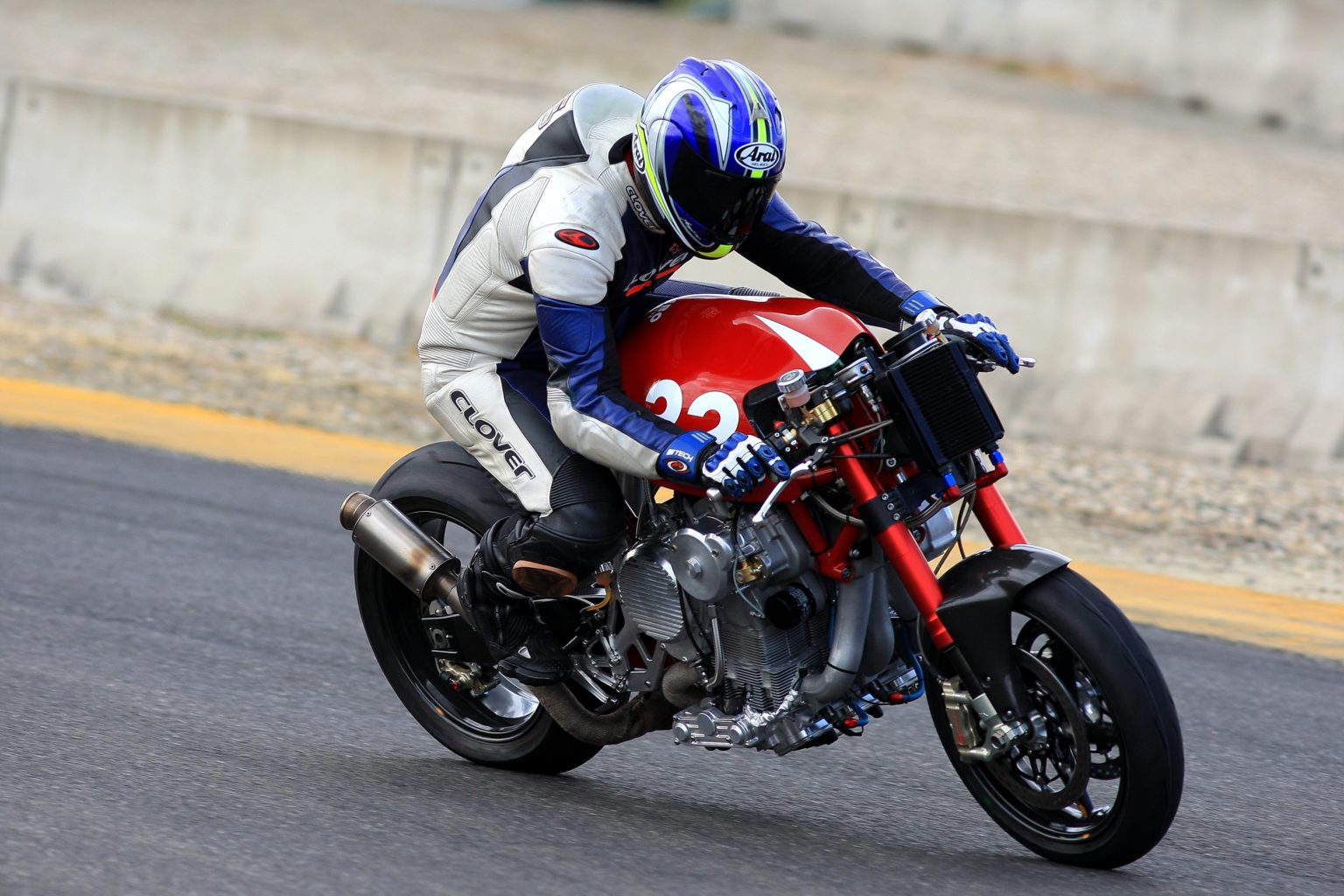 Nembo 32 is not a custom build aimed for style or a modified bike to be “faster” than stock. As there was no “stock” version here. The powerplant You see below the tank – is a custom made three cylinders 2-litre engine (where the number 32 comes from) placed upside down.

At first glance it kind of looks like the old Ducati Monster. Only at first, as when You look closer there is something not right with the engine 🙂 Actually, the Ducati comparison is quite a long shot, but I couldn’t resist it. The first Monster was built by stripping down a sports bike. Moreover, Nembo 32 is all about performance, but it redefines the concept of a motorcycle, and it lacks the characteristic trellis backbone of the Ducati. In Nembo 32 the top of the engine does the job. 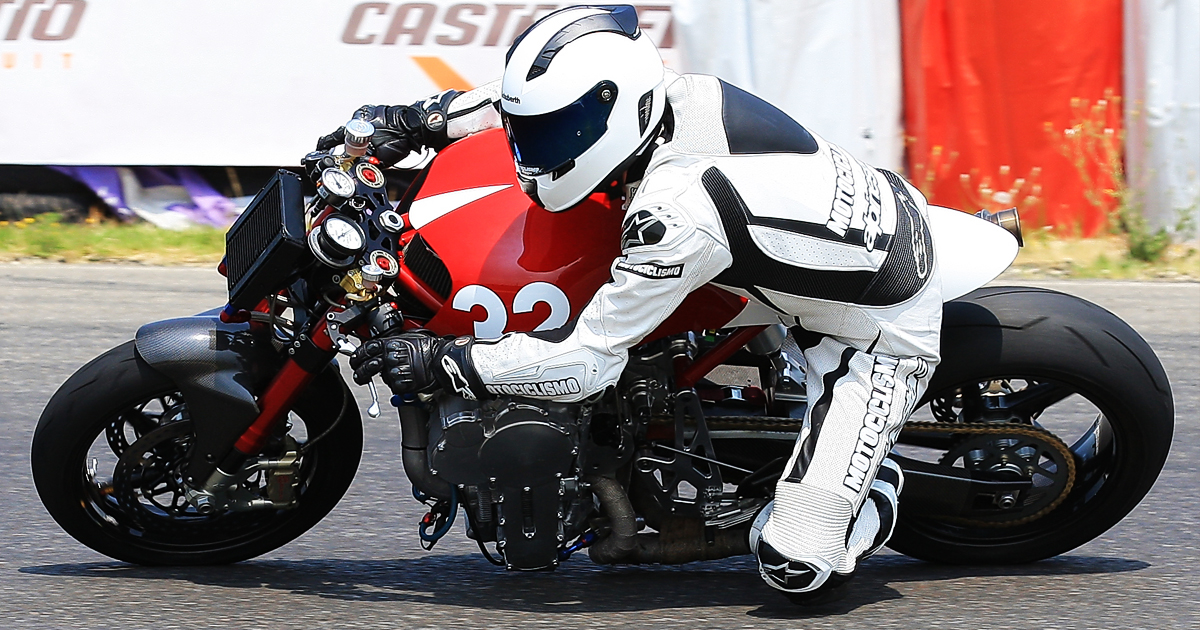 A comprehensive explanation behind this build is required with the words of the builder.

The Nembo 32 is a motorcycle with an upside-down engine

Yes. There is no mistake here. Not only the forks – it’s the engine that’s also “upside-down”. Why?

The Nembo is born from my will to increase, as never before, the centralisation of the masses of a motorcycle, by placing the engine upside-down and using the engine block as a chassis to bolt the front and rear end and any other part, without involving the cylinder block. Our “bike diversity” idea is based on the recognized technical benefits given by the upside-down placement of its engine, as better explained below and as attested by the success of the 2013 italian “Motociclismo” magazine test-ride, preceded by the 2012 invitation by BMW Group at the famous “Concorso d’Eleganza Villa d’Este” lake Como, Italy. 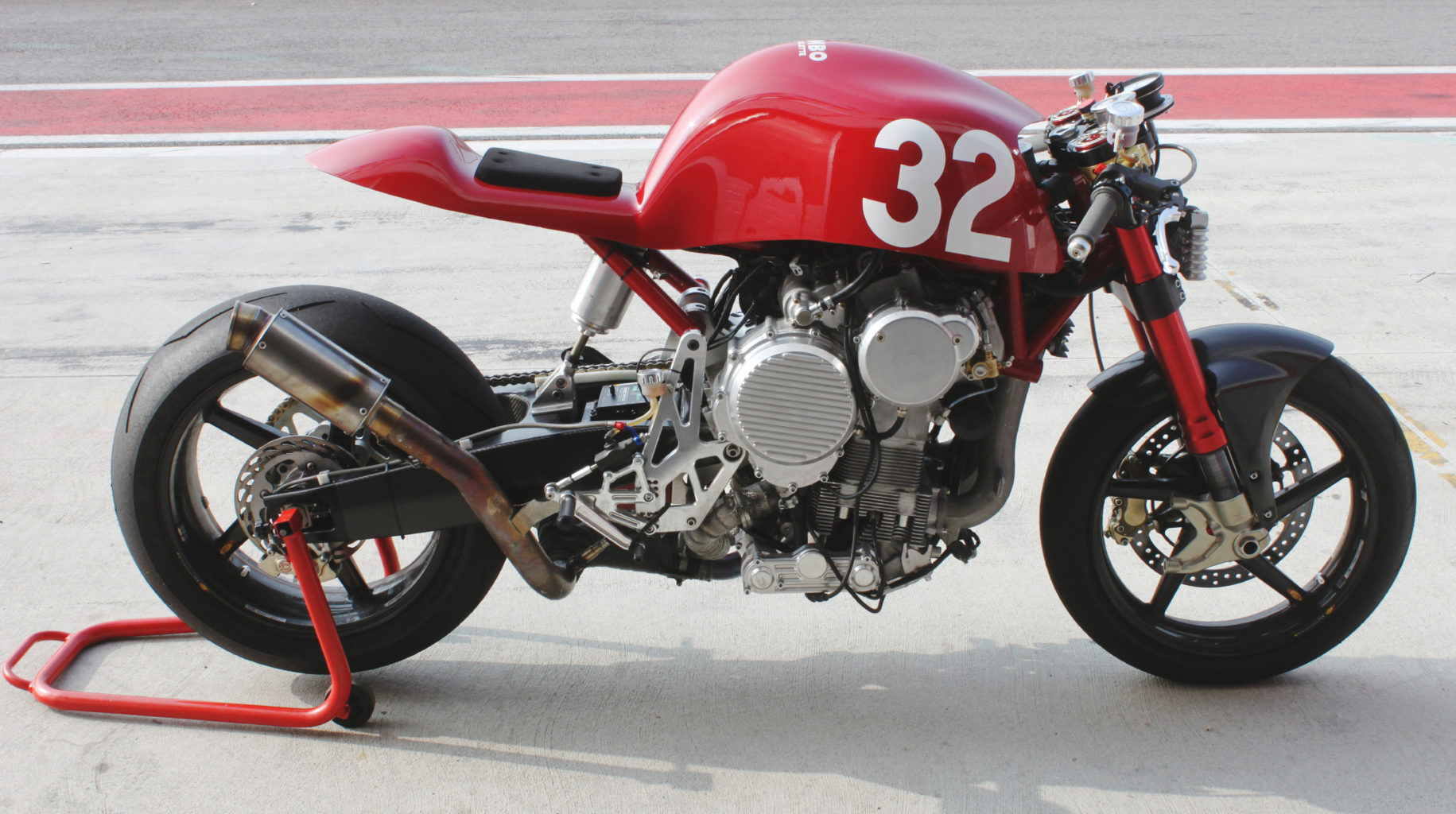 The Nembo 32 idea also started because, in my opinion, the more small factories exist, the better is for the motorcycle world and for its economy. It’s a people’s freedom matter. Currently, we see constant homogenization of form and functions, of shapes and performance. This is not healthy for “bike diversity”, nor for motorcyclists, nor for people, nor for work.

Well, I couldn’t agree more on the second part. As the motorcycle world follows the car world – it becomes obvious what is going on. There is fewer original brands and manufacturers year by year. Right now even the most prominent brands are starting to cooperate – sharing the engine designs and other components. Soon – we will all be driving one car just with a different logo. So I keep my fingers crossed for everyone who dares to challenge this state of things.

The Nembo 32 in theory 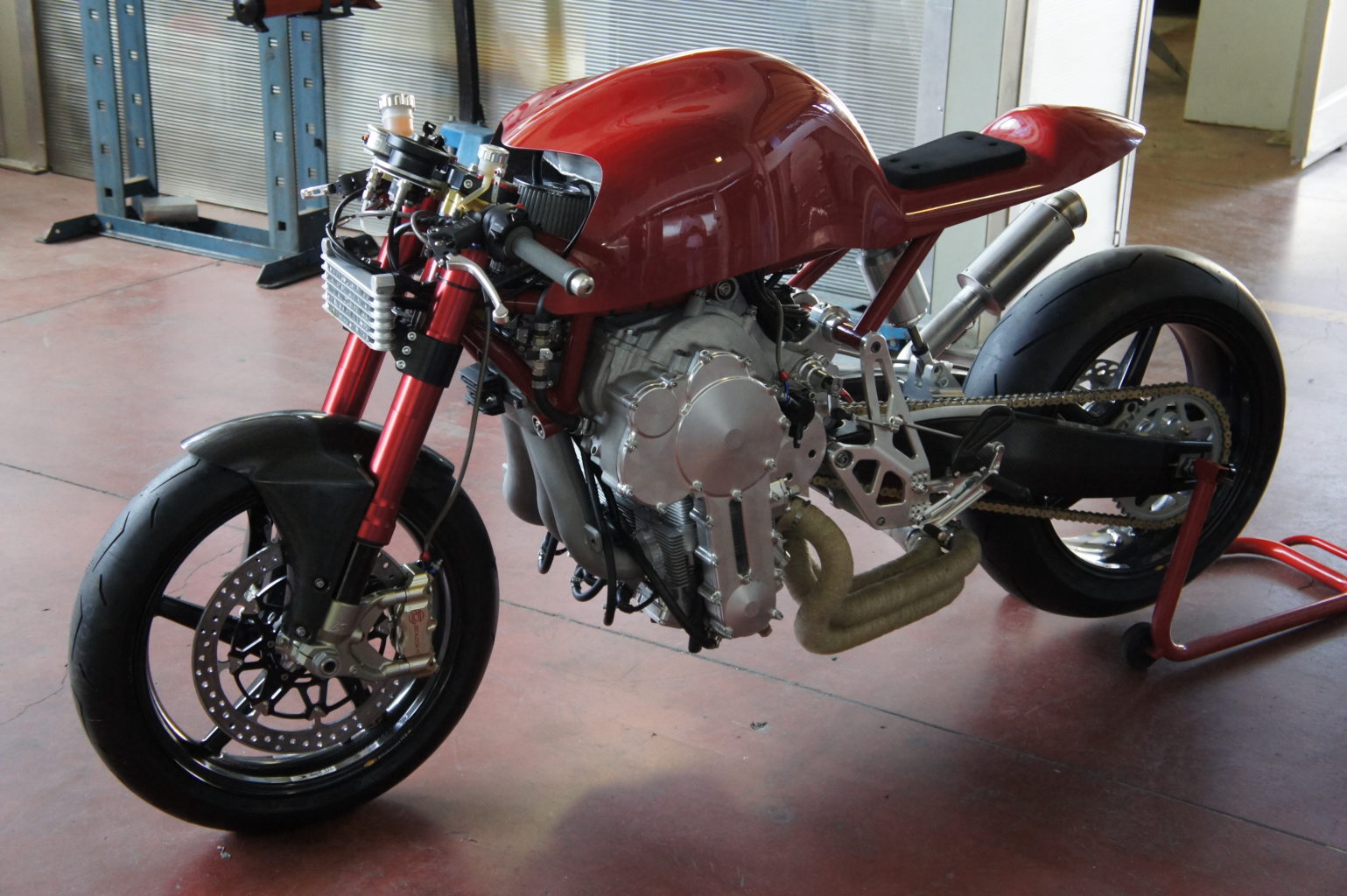 About the centre of gravity

In a motorcycle, the mass system is unstable and variable, because it is in balance only thanks to its speed. In addition, there is the rider who continuously moves, changing the position of the centre of gravity of the system.

Due to their higher centre of gravity, sports and racing bikes are quicker to go down when cornering, even if they are more reluctant to pull themselves up for the changes of direction. The touring bikes, with a low centre of gravity, are easier to raise, but more difficult to insert in the corners. 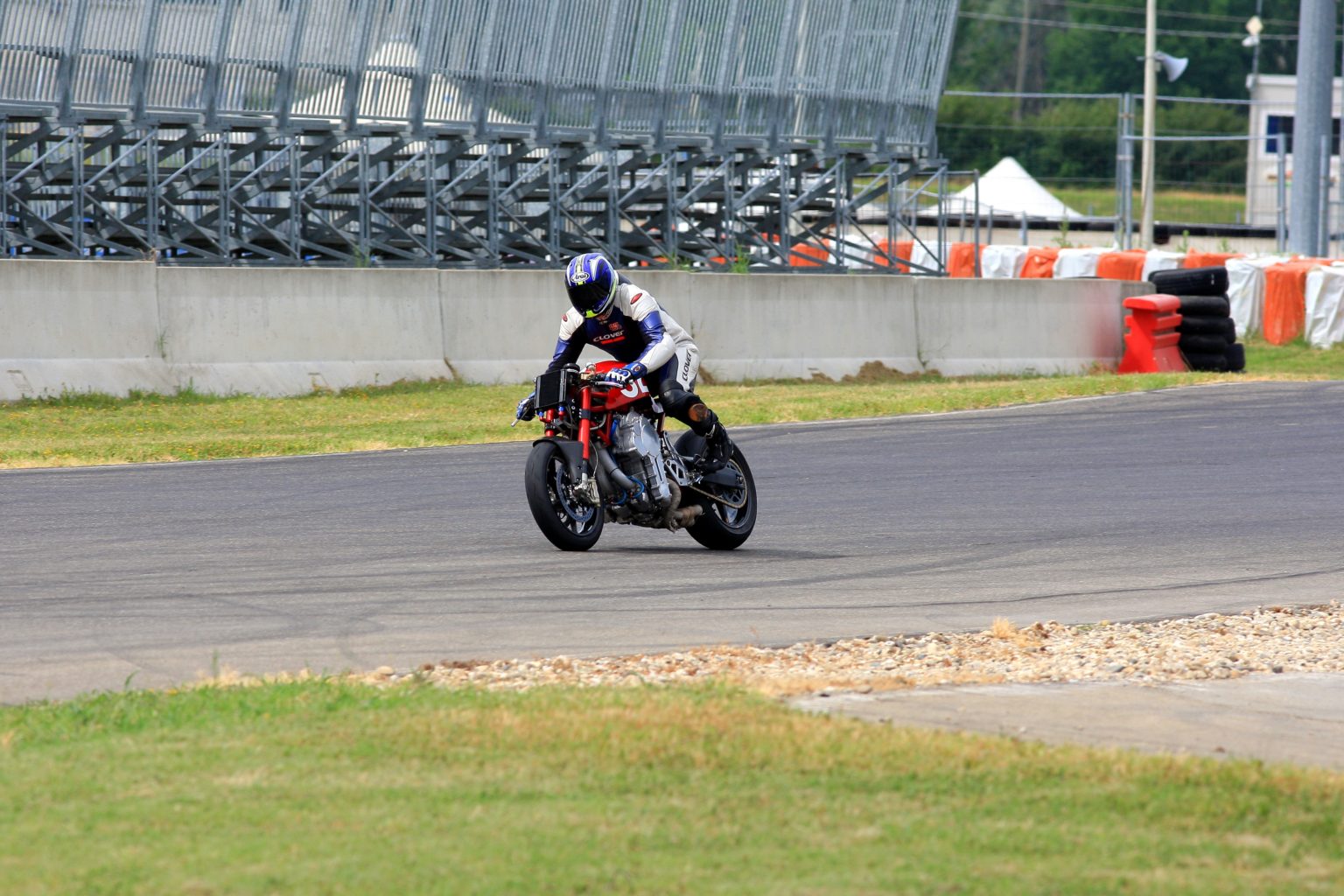 To make a sports bike more inclined to get up from the corners, we have to work on the distribution of mass, between the front and rear, advancing the engine to load the front more. At the same time, the swingarm is to be extended, to preserve the desired wheelbase and also to maintain good stability. 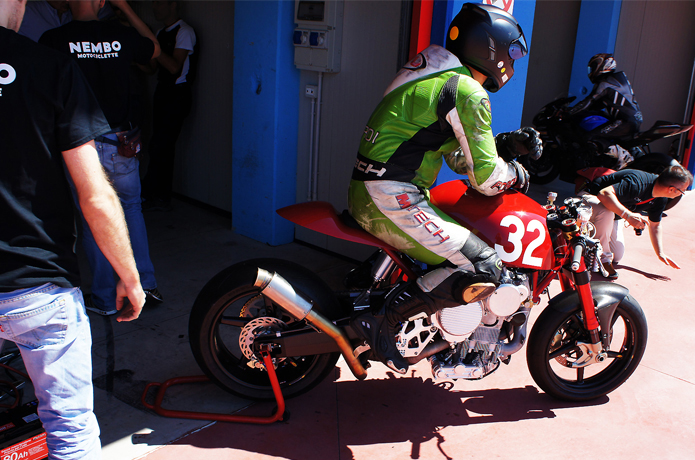 As you well know (see MotoGp), getting the perfect balance between center of gravity, front/rear load transfer, chain pull, sprung and unsprung masses, swingarm fulcrum height, swingarm length, mass of rotating or counter-rotating crankshafts, camshafts, balancing countershaft, transmission shafts, clutch, offset, trail, suspension adjustment, tires and changes in rider position, is such a daunting task that the psychiatric hospitals are plenty of motorcycle technicians who have tried to perfect that … 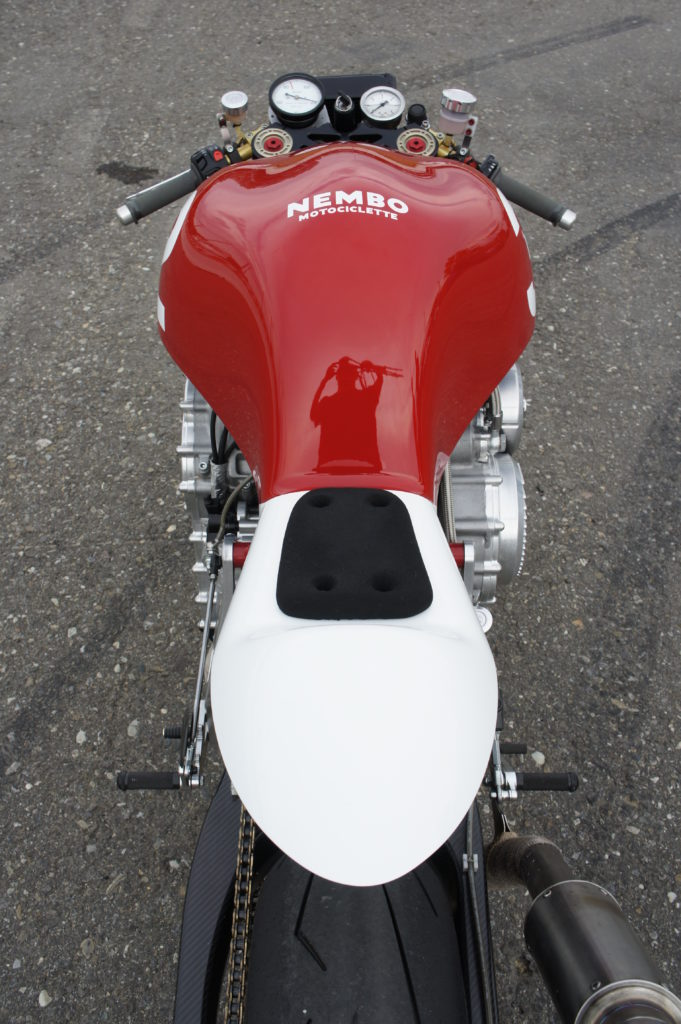 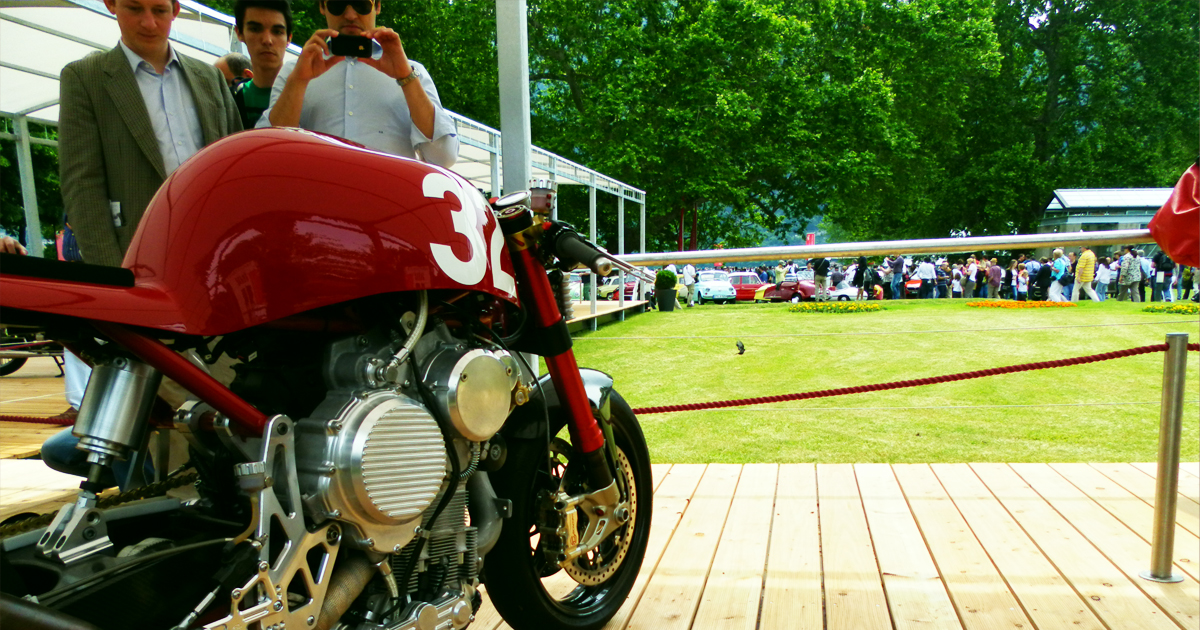 About the centralisation of the masses 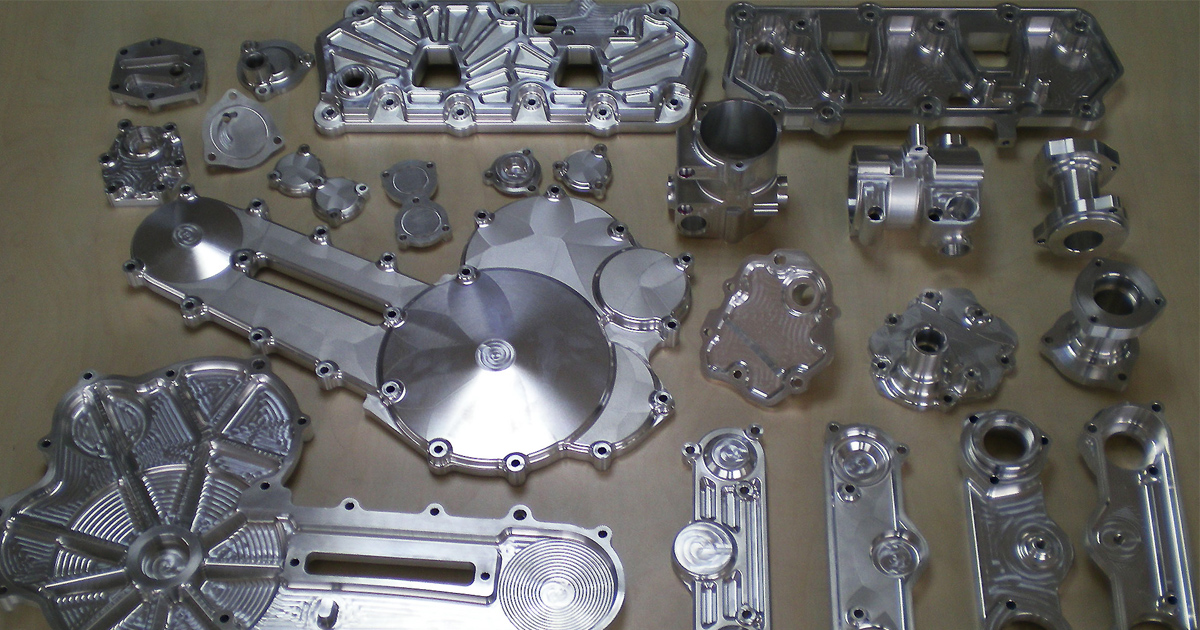 To achieve all these primary goals, beyond the secondary ones, that I leave out, not to bore you, the most obvious solution was to invert the engine placement. And I did so.

The proof is in the pudding, as our tests and the “Motociclismo” magazine test-ride demonstrated. The bike performs fine. A pleasant surprise was that the Nembo 32 architecture “immediately” feels any adjustment of the chassis connections position and suspension set-up, and this is a good sign. As you know, the bad comes when you adjust chassis and suspensions in a thousand different ways but the bike behavior does not change… 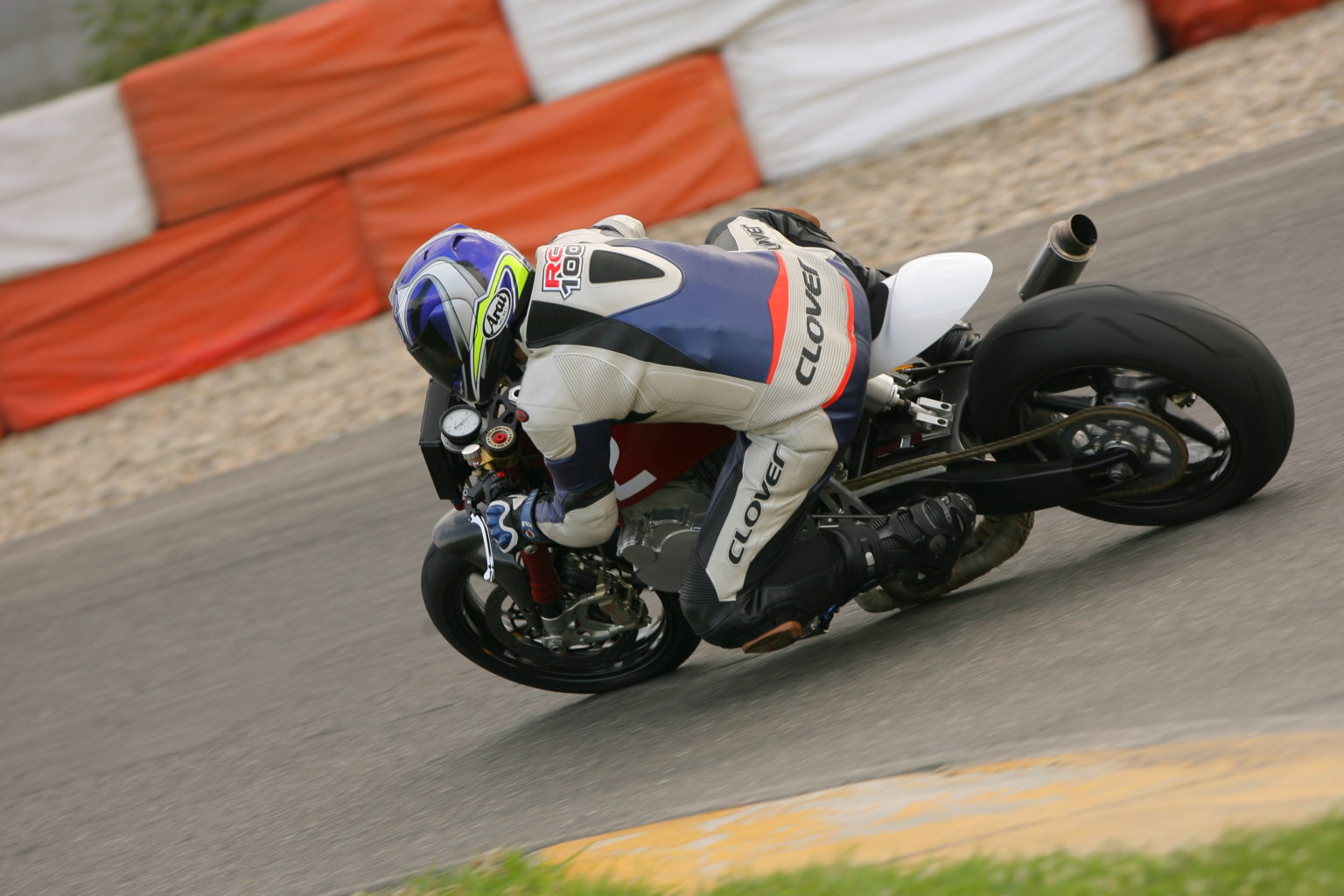 Finally, I can use the crankcase as a “platform” to which I can “bolt” any different technical and stylistic solutions. The 32 is now like a sheet written only in small part yet but the next is clear in my mind. 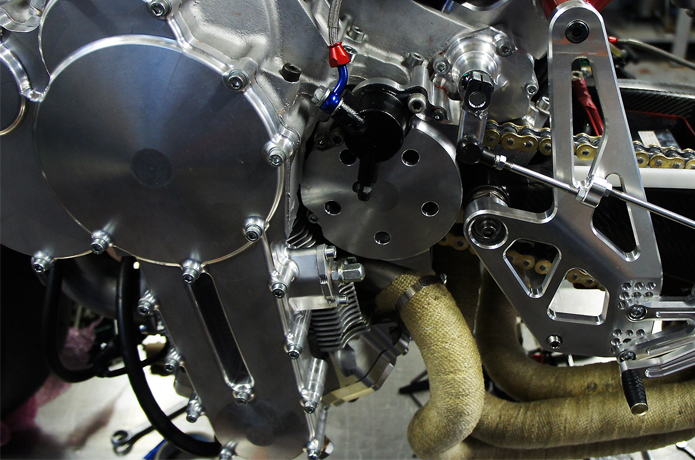 To achieve the above, the crowdfunding initiative was started.

It is a fundamental moment for the story of Nembo Motociclette. At this point, the 32 must be produced in at least 100/200 units per year. To be sold at a much lower price, i.e. around 50/60.000 EUR. In fact, to build these so special motorcycles and engines, by order, one by one, is now too expensive. The construction of each 32 is done by hand and costs like that of a racing prototype.

None, so far, has tried a crowdfunding campaign for an Internal Combustion Engine powered motorcycle, to create a fine running, semi-industrialized motorcycle brand to lower the unit cost. 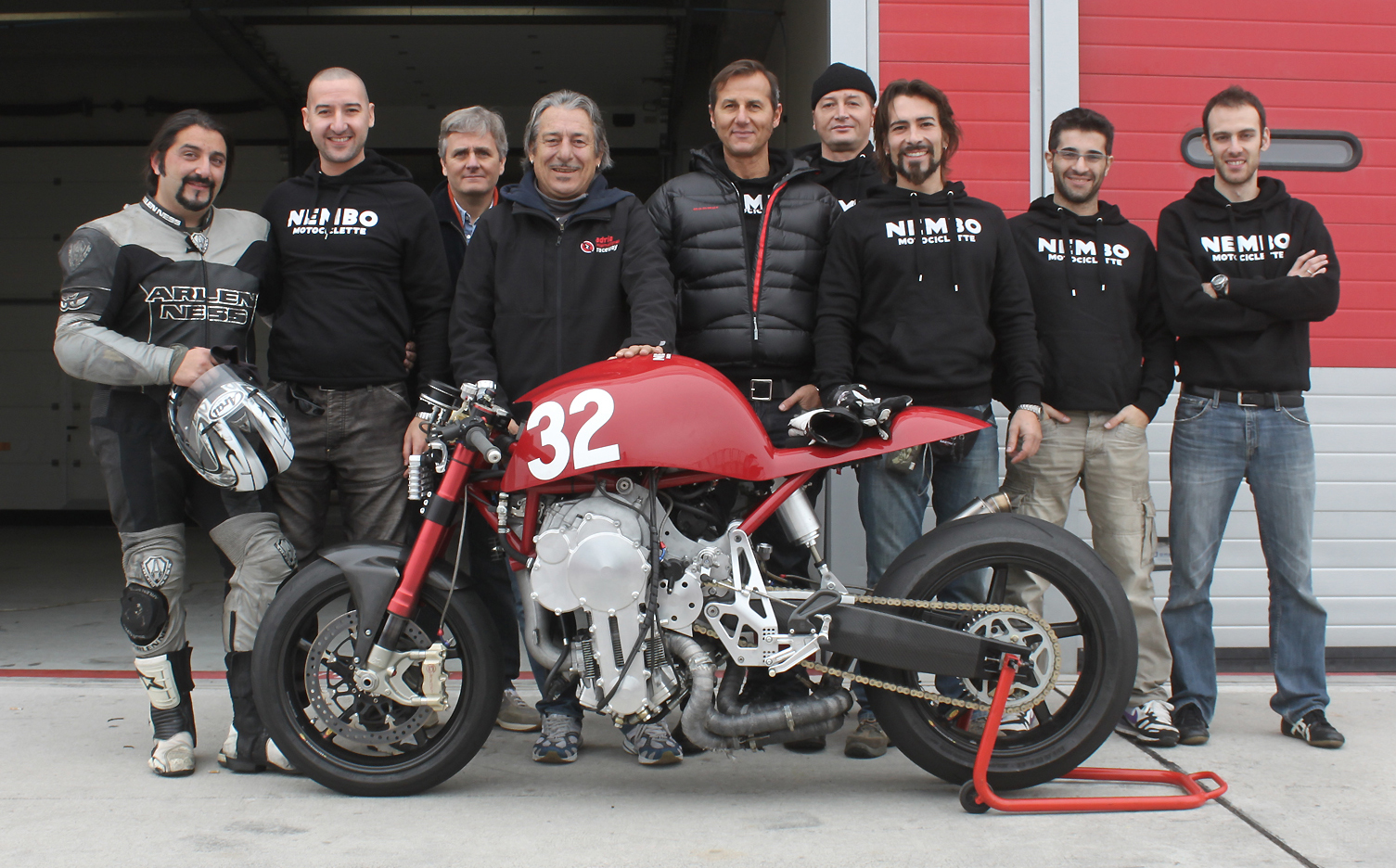 Nembo Motociclette is trying to raise funds via Indiegogo, now at:

https://www.indiegogo.com/projects/the-nembo-32-no-bike-is-alike
Read more details about the goals and problems to solve on the website linked above.

A new Nembo video to tell it to who does not know it yet:

PS. This is not a sponsored post. I was contacted by the builder that would like to get more range, share his project and passion behind it. After getting to know the facts and reading the press release, I was hooked and found it interesting. I’m not the one to judge on the engineering perspective, neither I had the chance to test drive it – so I won’t be making any definitive statements. But I love to share it with You – it is a different motorcycle story.  And just that, being “different” makes the whole motorcycle world more interesting. 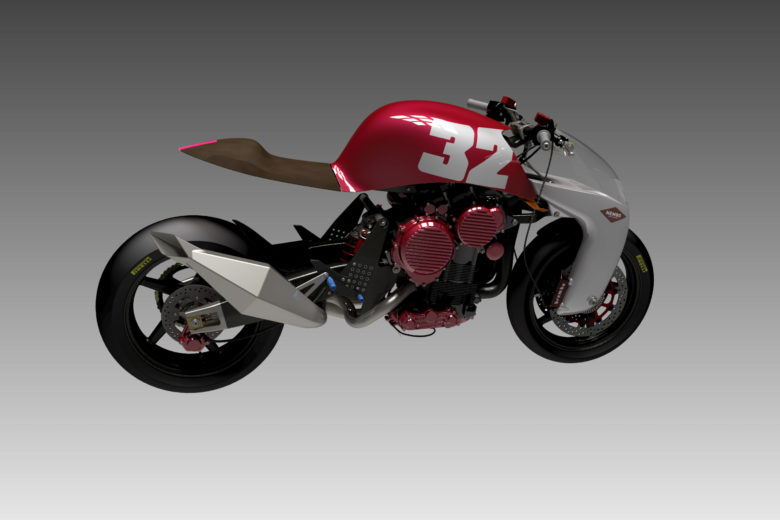