Following a quite recent Top 5 of Suzuki DR650 post (that was very well received – thanks a lot!)… let’s check what the main competitor of guys from Hamamatsu – Honda, has to offer.

It’s difficult to pick a particular model for this Top 5 list. Since there were many versions over the years that Honda released in the dual sports/adventure segment – badging them as

They differ on some frame details, wheel sizes, and purpose adaptations – some being designed for heavy offroad with more suspension travel, other more street bikes with a bigger fuel tank and more comfortable riding position. You could write a book studying differences over the generations released for each particular designation listed above – but that’s not the point of this post.

For this Top 5 list, I would loosely focus on the general dual sport/enduro/adventure segment and customizations connected by the heart of the motorcycle – the engine. In this case – quite  legendary: RFVC (Radial Four Valve Combustion) engines family. 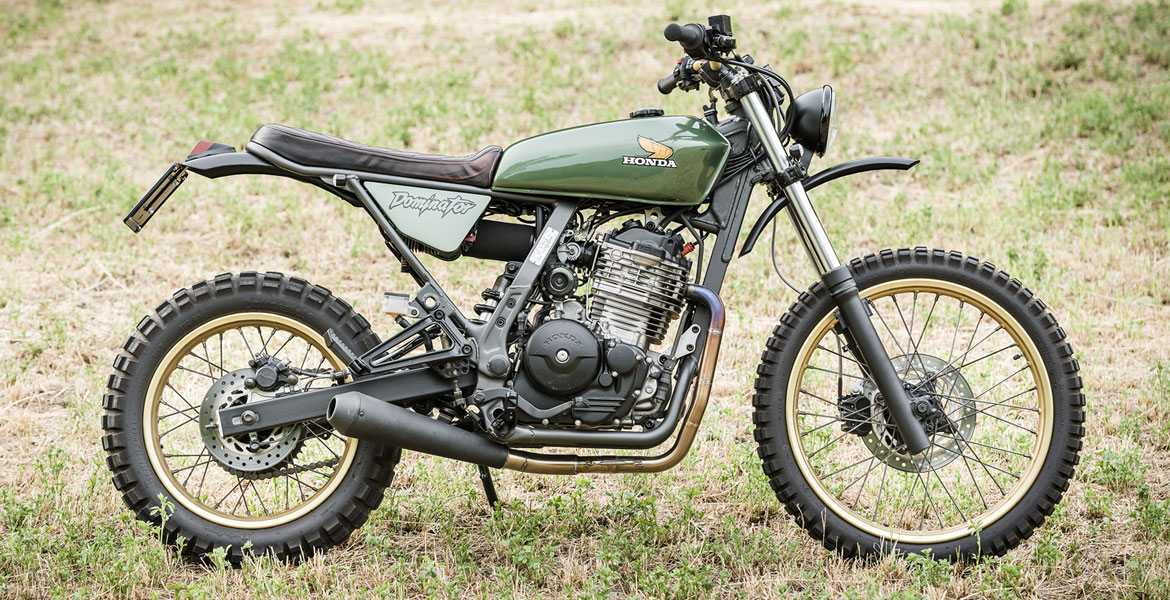 This build is about low budget… It proves that You don’t need a ton of cash to have a unique and good looking motorcycle. What You see here is a list of quite simple mods: losing the airbox for foam filter, cleaning the rear end, adding custom side covers and a really nicely upholstered seat. Front forks are stock, dropped a little and hardened. Wheels are originally gold! The headlight is affordable – Bates style lamp. And the result is quite good looking, green scrambler. 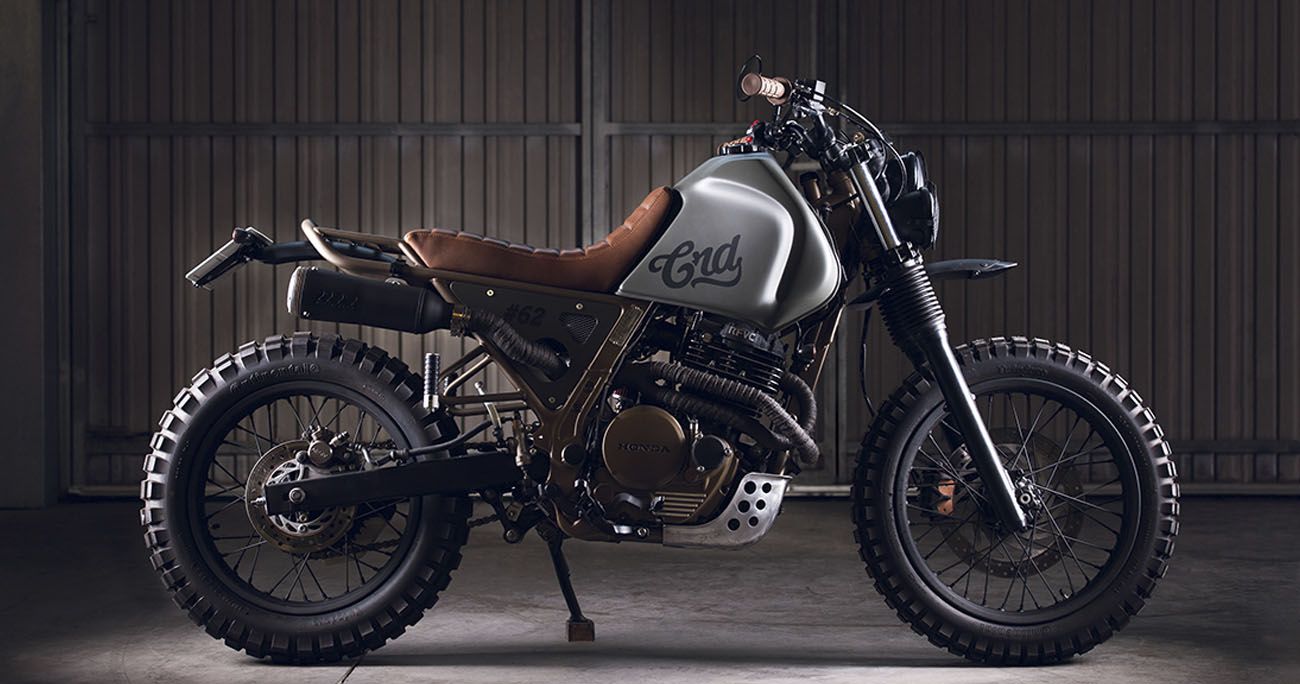 You could fill the whole Top 5 list by Cafe Racer Dreams builds based on this source material. They have actually built 6 of these so far (if I calculated correctly). From these, I chose one. One that stands out the most – from the general customization style of all the competitors.

And this is what I like about this build. They tried to civilize the original design. Disproportional tank and high handlebar – to make it more stylish. Did it work? Not really, it’s still heavy and seems like released by Honda… but there is something about the metallic paint job, open rear end, and the brown seat, that is quite elegant. 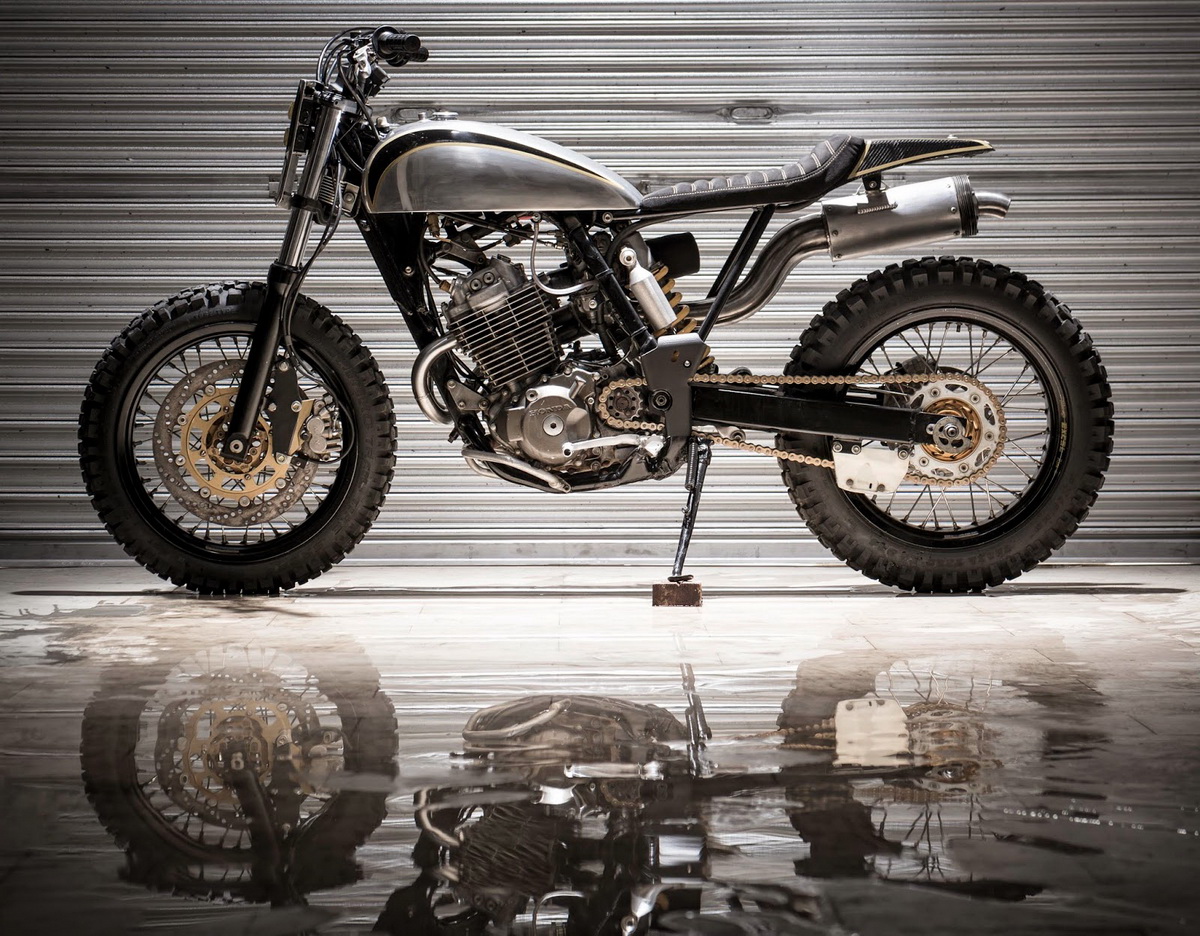 This one is based on a smaller displacement engine – XR400R. It is lowered but left with offroad tires. Suspension travel is reduced and based on the rear end design – it is aimed to be a street tracker. Interesting stuff – the tank was custom made, not borrowed from any other bike. The exhaust is originally mounted Akrapovic. And the tail is real carbon fibre.

Regarding the performance stuff: the front end was swapped from a CBR600. And the engine was tuned a little with 450cc piston kit and hi-lift cams. I wonder how much weight has been shaved off – since the stock version is quite light… the kg number must be really impressive after further reduction. 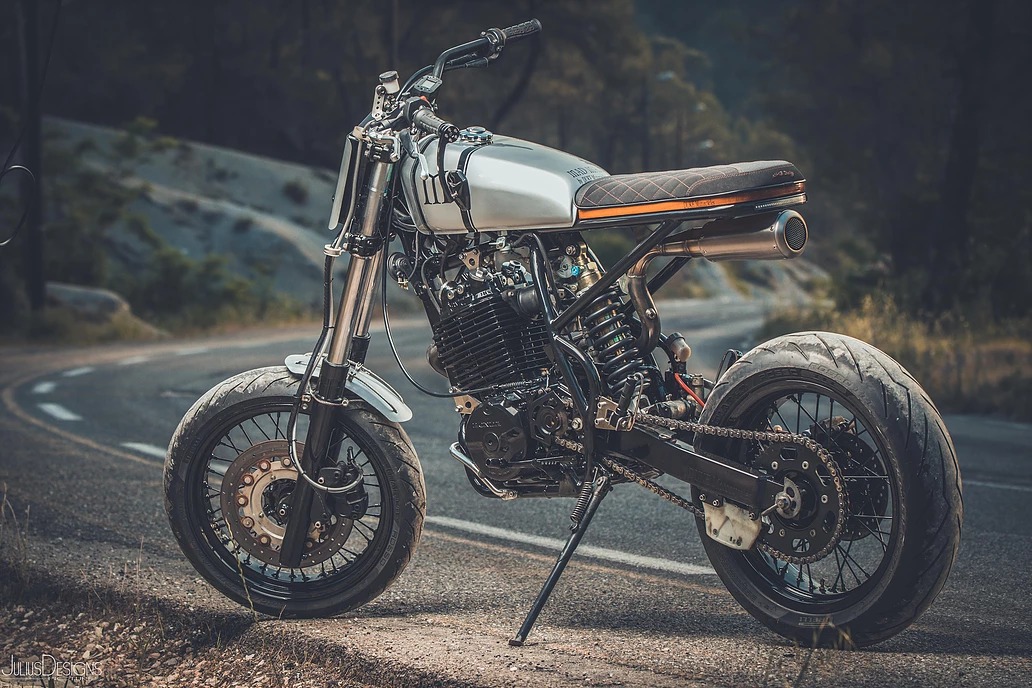 Just 2 days ago we featured a build from Duke Motorcycles. “Mrs. Duke” CB500. And they are featured again – on this list. Meet “Mad Max”. Another one of their builds – released about a year ago.

It is a stripped-down version of XR600, converted to a supermoto segment. Equipped with smaller wheels with road tires (just like the next bike), but… left with the original riding height. What is really interesting about this build are the details.

The seat is detailed with the wooden board – as the build was done for a World Champion Snowboarder Maxime Montaggioni… who is missing his right arm! Therefore you don’t see any lever on by the right grip – both brake and clutch are on the left side of the handlebars. Big respect for the effort and passion! Never give up! 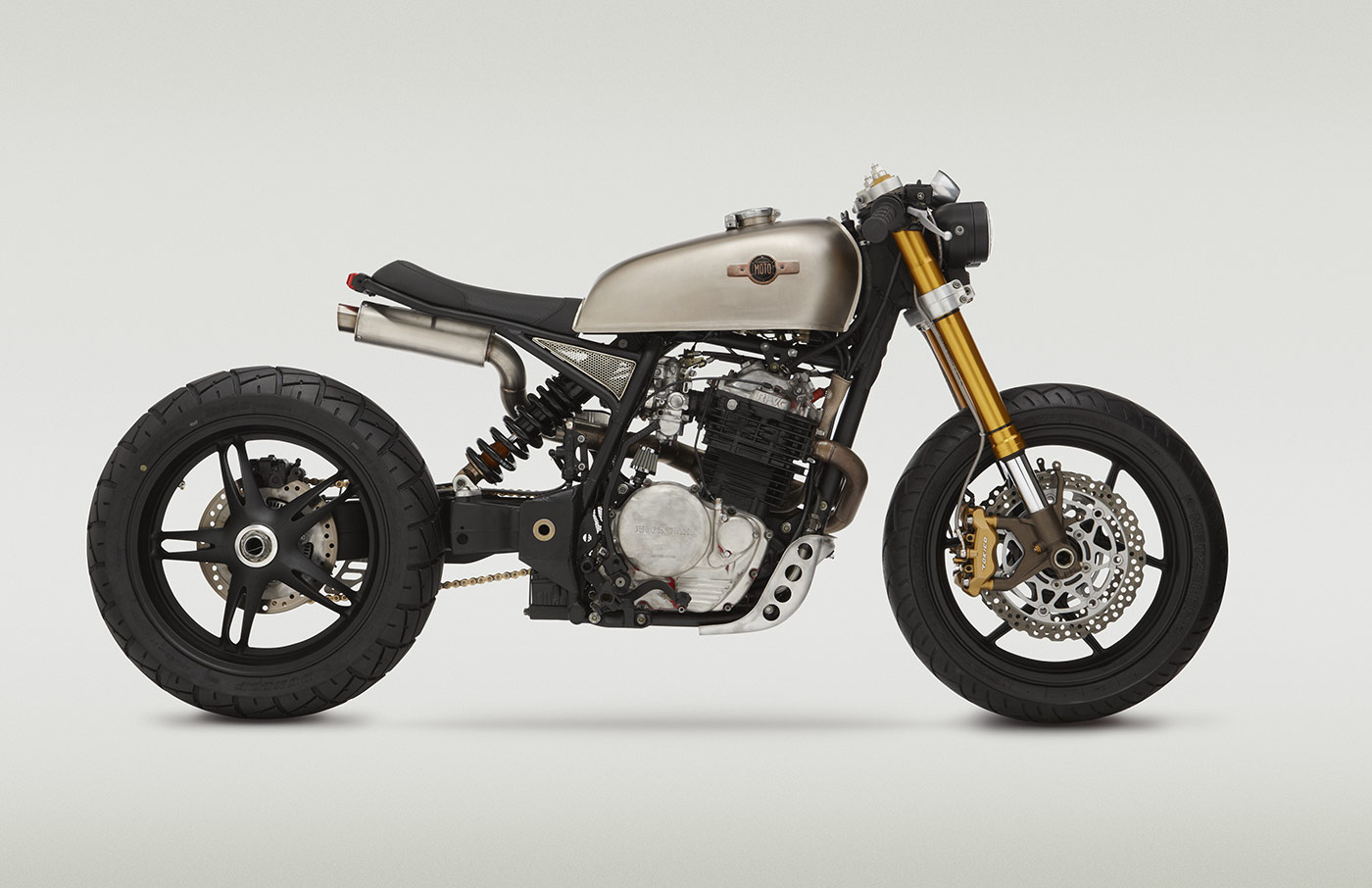 Well, one of the most popular builds and most common pictures on google images regarding general phrase: “Custom motorcycle”. It is based on Honda XL600R and heavily modified. What made it so popular (besides the good looks), is the person who it was built for. Classified Moto are well known for building movie props – they are the authors of “The Walking Dead’s” Daryl’s Honda CB.  This XL600R build came earlier. It was built for Katee Sackhoff (Battlestar Galactica, Longmire, Oculus, etc.) – who is an avid motorcyclist. (Hi! Big fan here!). 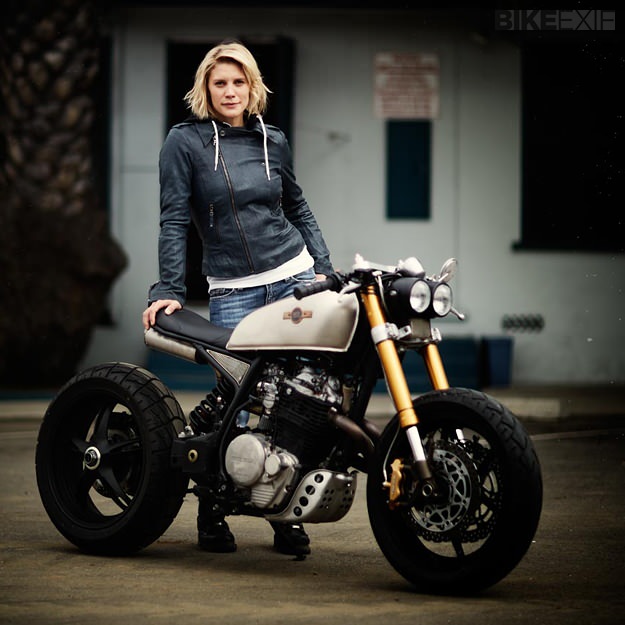 I especially like the twin headlight, that is somehow pressed against the steering head.

BTW. This is not the only bike Classified Moto built for Katee. Below is the second one (this one based on  XR650L designated as KT675NZ). Both quite similar – listed as one. 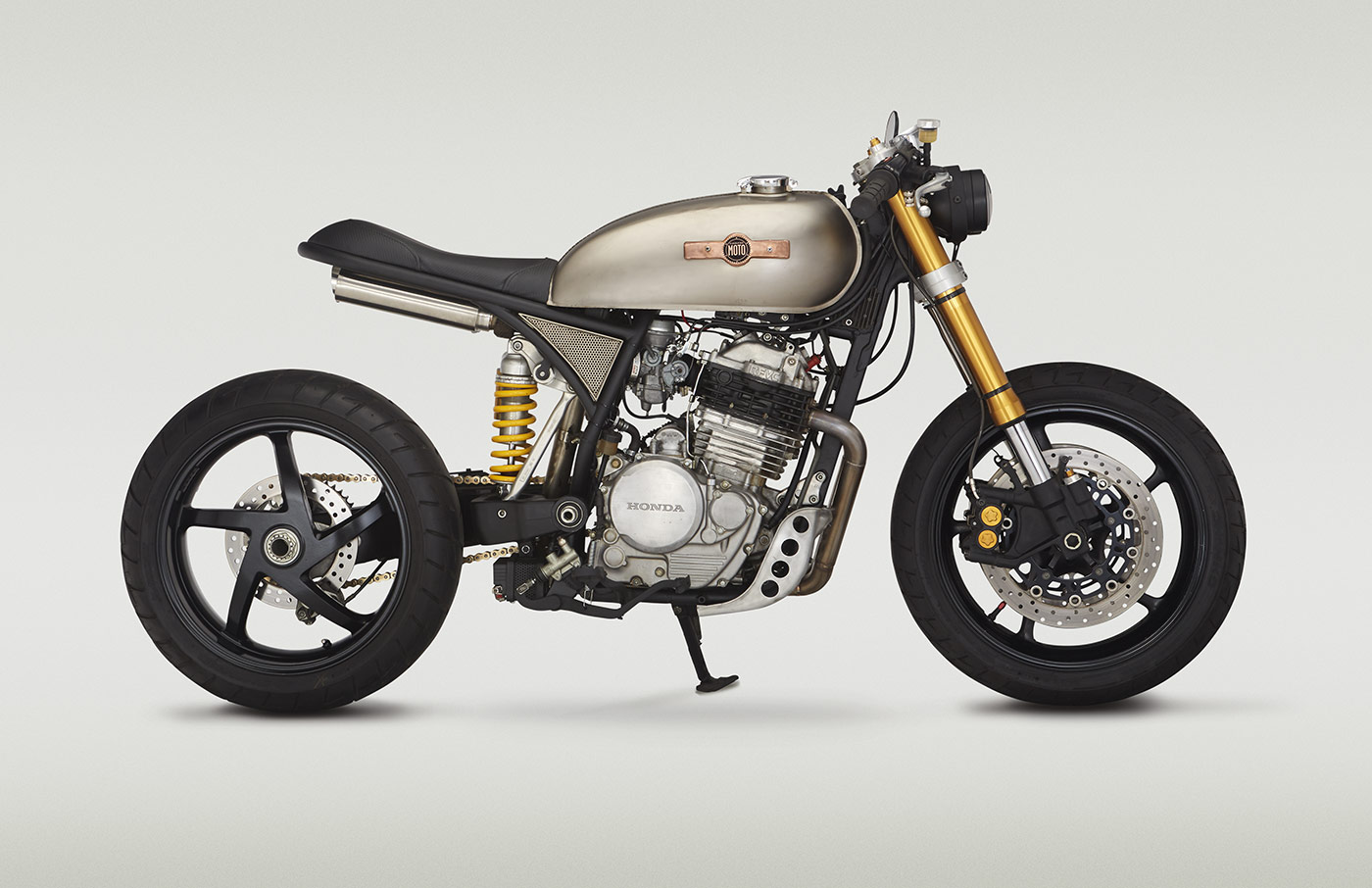 Quite extraordinary donor bike this is. The engine is a single cylinder with 2 exhaust ports 🙂 The frame and geometry are quite scary at first glance, but with some simple swaps or dropping the forks – it can be converted into anything from a Scrambler to a Cafe.

So the thought of the day would be:

And as usual – this is not a top to bottom list. The order is random, there is no winner here (trying hard not to nominate the KT600, for obvious reasons).