Not many of the motorcycles I ever tested left a mark like the Speed Triple. The particular model that stormed my “bucket list” was a green 955i. The aspect that impressed me the most – was how easy I was able to “ride in” the machine. I felt super confident and comfortable only after a few corners. And as I am a very cautious and ordinary rider that doesn’t have the ambition to scratch the footpegs on every opportunity – this made me want to have this bike, as it was so easy to ride aggressively!

I honestly have no idea what would be its function in my garage – as I already own a muscle bike, that also does very well as a touring bike (something that Speed Triple won’t do). But I still want it… Maybe someday.

Basically, it was the first factory street fighter. Initially launched as a stripped down Daytona. It had the same chassis, engine and clip-ons, which were quickly replaced with a regular handlebar – making the Speed Triple a perfect example of the segment defined above. The most characteristic features – 3 cylinder engine and “bug eyes”: dual round headlights (that, unfortunately, were reshaped in 2010). It was either “love it or hate it” for the looks. But pretty much everyone was unanimous regarding the way this thing rides.

I decided to make this list – out of the sincere respect for this quite underappreciated machine.  It’s very characteristic stock (single-sided swingarm, 3 cylinder engine, specific looks of the frame and headlights) – all this makes it, not the first goto motorcycle when considering building a custom bike. Kind of a contrast – a Triumph, that cannot be customized easily… Also performance-wise there is not much to improve (even the weight is exceptionally low).

But anyway – there are few builds out there, that can easily inspire. 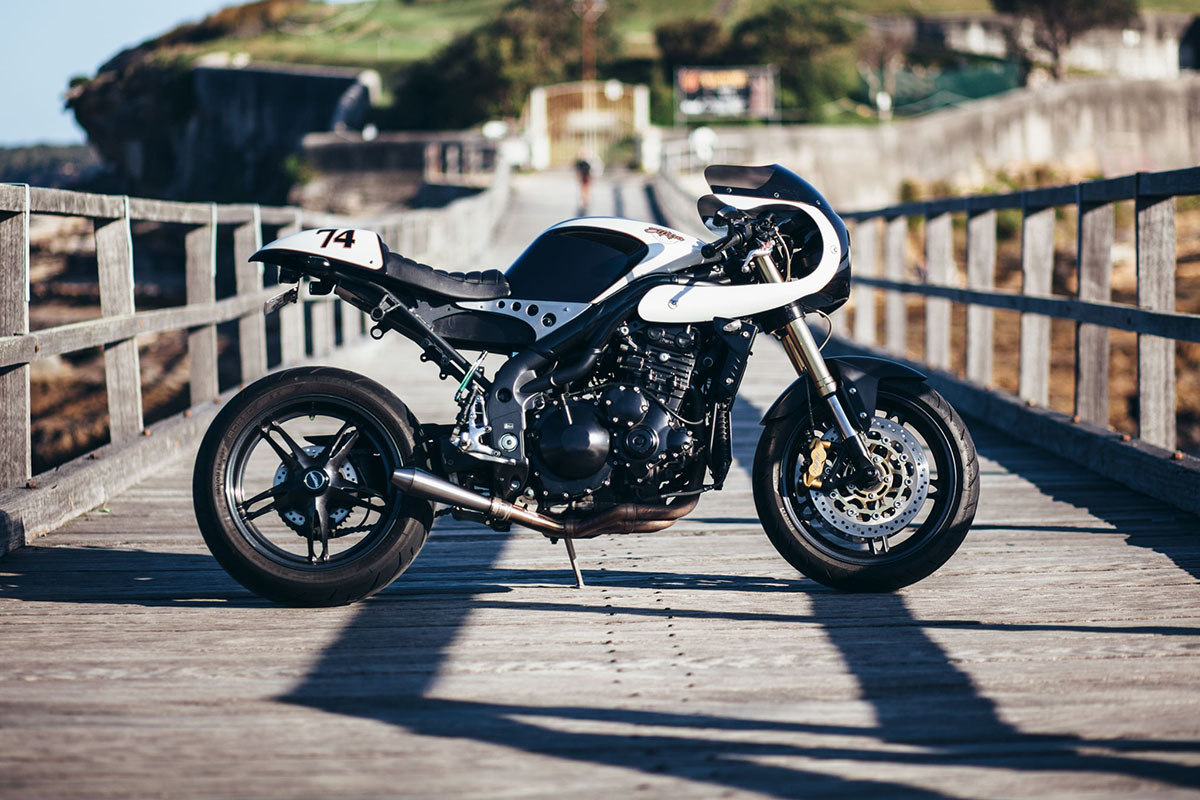 A perfect example of trying to convert a Speed Triple into a cafe racer. It’ doesn’t quite work all the way – but with so much effort and attention to details, You can get somewhere near the level of “retro” as the “R9T Racer” represents (it somehow comes to my mind when looking at this version). I like the vintage fairing with a single headlight and stripes. The tail is trying hard to keep a straight line with this brushed metal decor under the tank. Good tail proportions, small exhaust. A nice tribute to the old times – Le Mans and other 60’s and 70’s machines. The name fits perfectly.

What I don’t like is that the brackets under the seat were not removed – but I’m sure there is a reason for it. You can read the full interview with the builder – by clicking the link below. 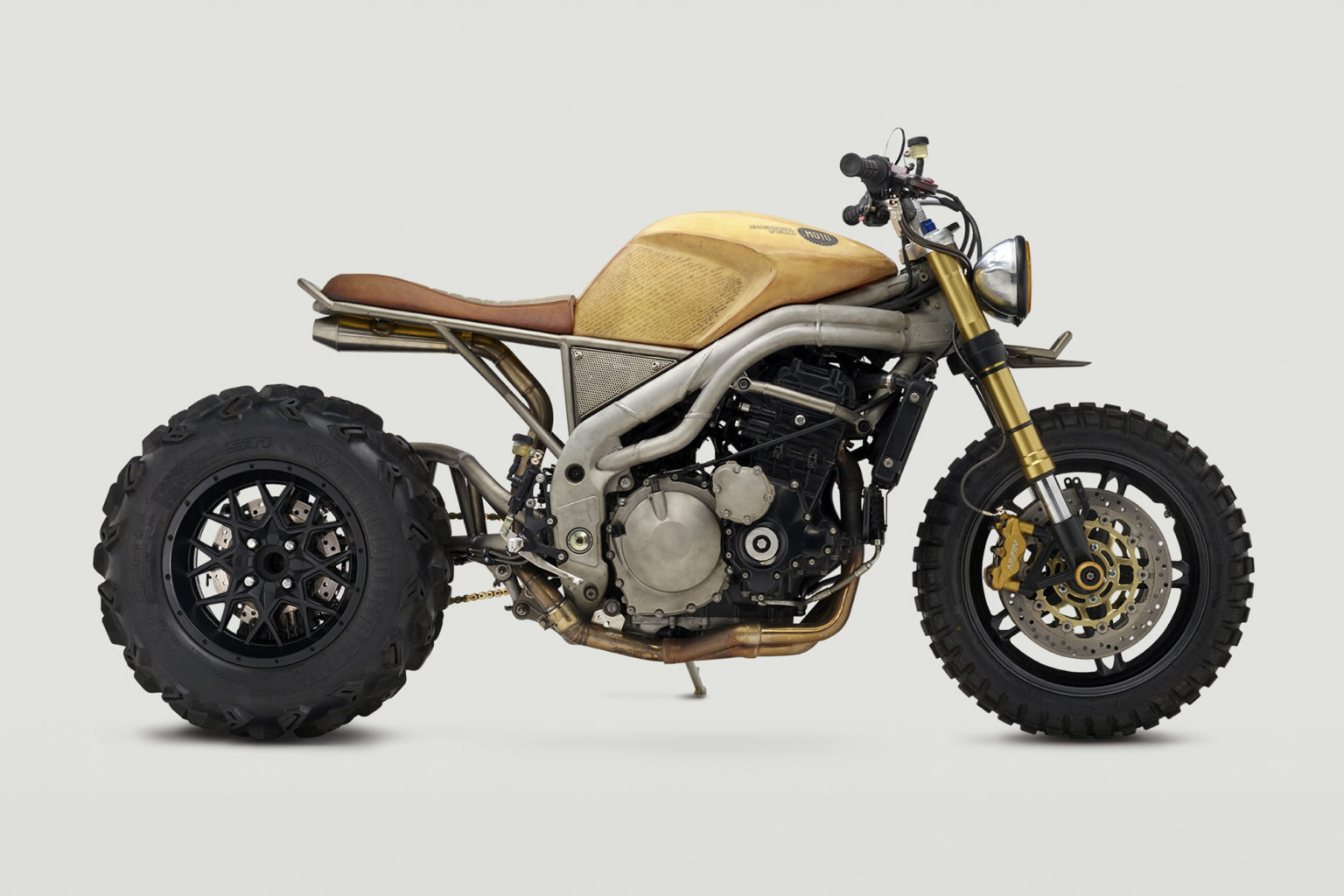 As mad as it looks – this profile is recognizable by a true custom bike fan. This is a signature style of Classified Moto. Actually up to the swingarm pivot – it’s almost a stock Speed Triple. The most characteristic aspect of this build – is the 11 inch rear ATV wheel (with a big balloon tire). This huge rear tire balances the proportions and even lets the super small seat look good. Seems like it’s quite common for this bike – stock or not – to be “love it or hate it” kind of thing. 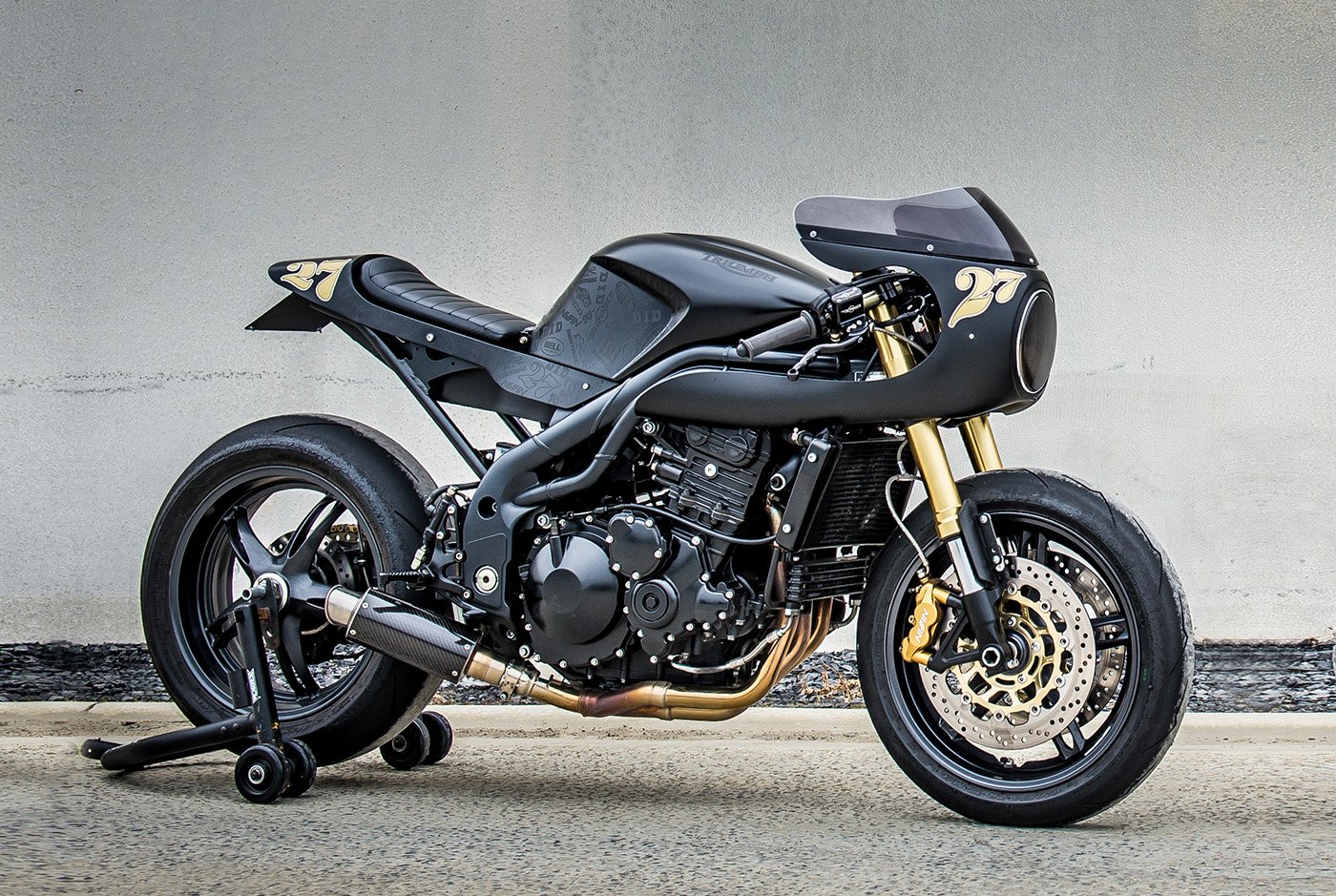 At first glance – this build is similar to Daniel’s build above. But it has some nice specific touches to it. First of all – the front fairing is carbon fibre, and it somehow perfectly aligns with the aluminium frame curvature. The windshield bottom is at the level of the tank top and tail highest point. All mods are simple – seat looks like it’s one piece of shaped metal. No brackets and anything unnecessary.

I chose it also for one more reason – I believe that the black and gold colour choice (complemented by natural forks, callipers and exhaust colour tone) is the most elegant in the world. It somehow aligns with Triumph and its heritage better than with any other brand (well, maybe equal to the Ducati). 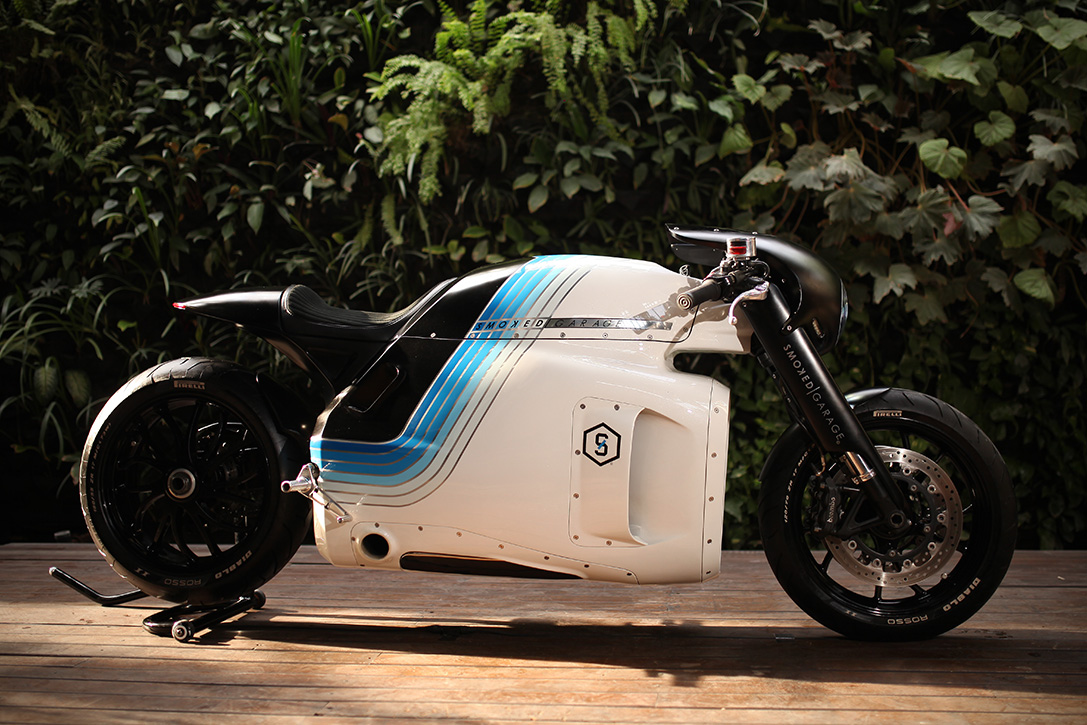 Well, there is not much of a Speed Triple original stance with this one. Since it is covered in hand-made metal bodywork. But still – it is a Speed Triple. Many difficulties were overcome while building this aluminium fairing – there are extra fans to keep the air flow and cool the engine that completely surrounded by bodywork.

But the effect was worth it. Aircraft-inspired finish, exhaust port and visible rivets make this thing a 100% effective head turner. 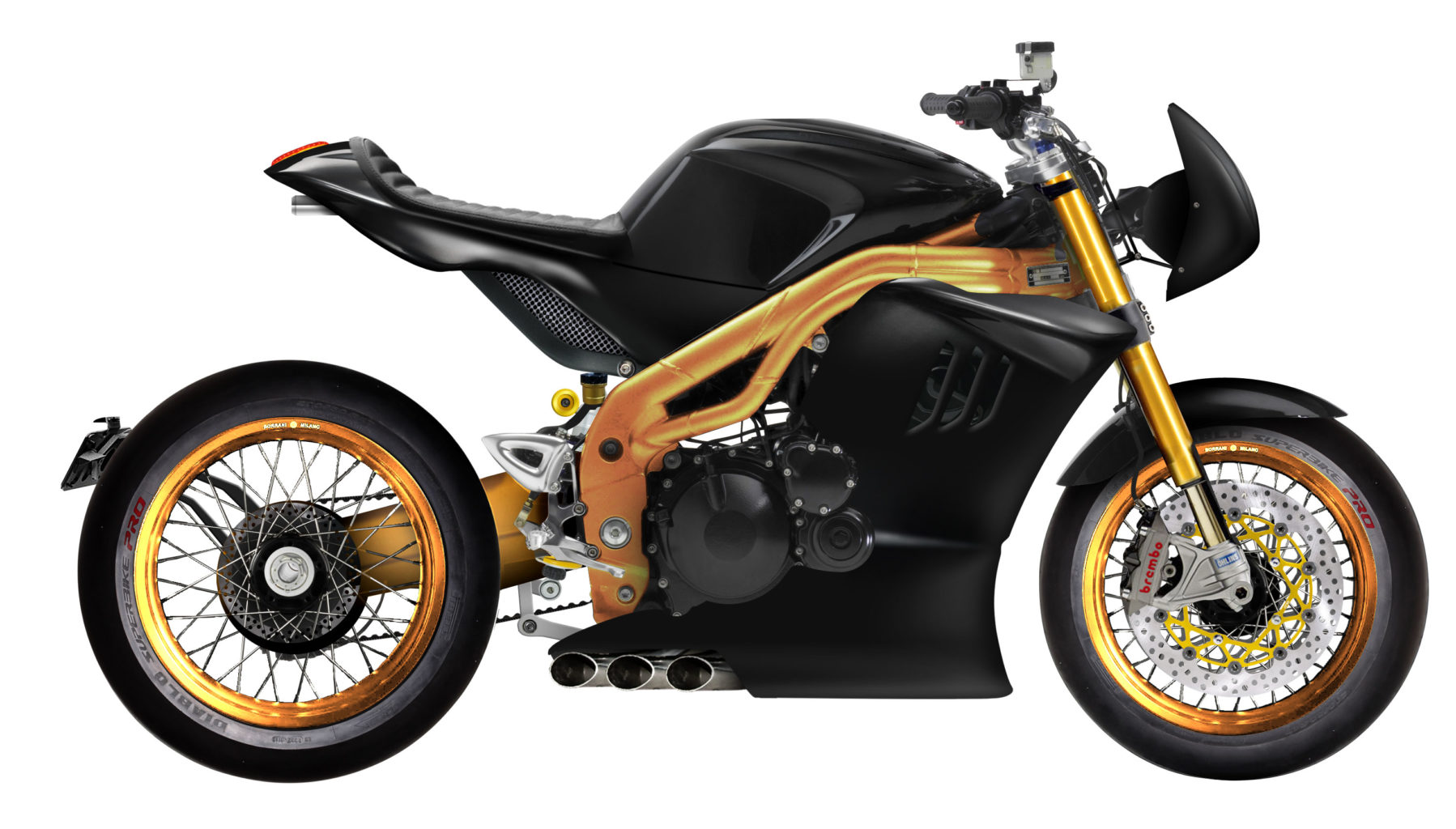 This thing is a part of 5 pieces limited series of track bikes. Track bikes are usually beasts concentrated only about performance. So there is hardly any room for design and looks. Not in this case. Not only it got the “Italian Styling” treatment, while still upgrading the components for the performance. I like the colour choice, spoked black and gold wheels, and this awesome mini-fairing on the twin headlight. They kind of moved the whole concept of the styling into MV Agusta Brutale regions (also – 3 cylinder engine). 3 exhaust tips sticking from under the fairing can be also confusing… but You are immediately reminded by the characteristic tubing of the frame, that this is a Speed Triple.

Read more about detailed specs of this 45k EUR machine by clicking the link below.

As usual – this is not top to bottom list. There is no winner here – I like all of them, each one for something special. And it feels good to have them in one place – as customized Speed Triples are so rare.