Another build from Mandrill Garage. But so much different than the previous one (link here). Previously I featured a nice and easy scrambler based on the Kawasaki W800. This time it’s a complete mix of styles, segments and almost sci-fi components. 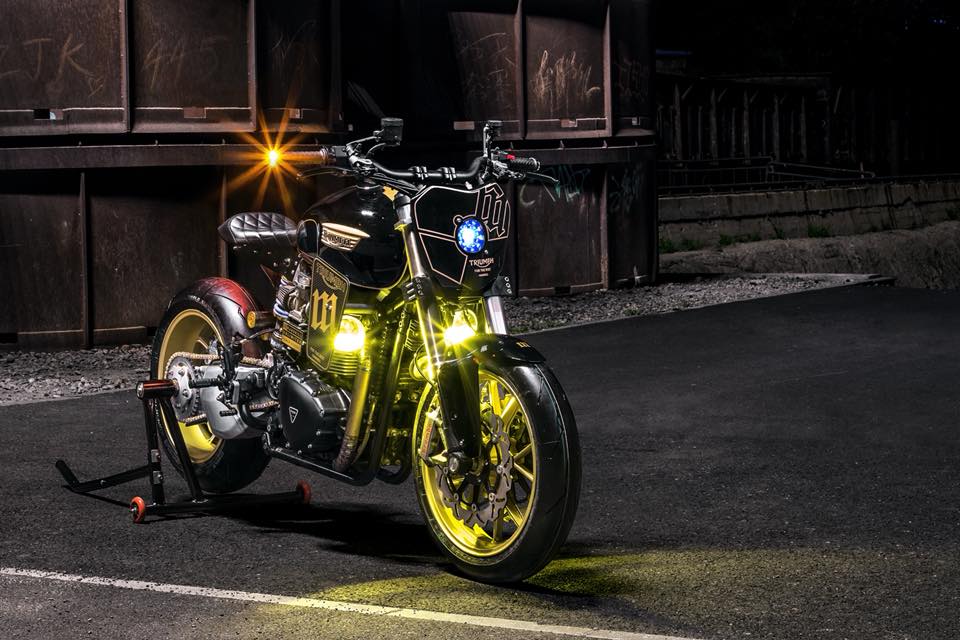 Usually customised with some old school retro vibe or restomodded to preserve its classic style. Mandrill Garage took things way further. While leaving the tank stock – the builder made the bike look… crazy futuristic. And it always works to have a black/gold paint job 🙂 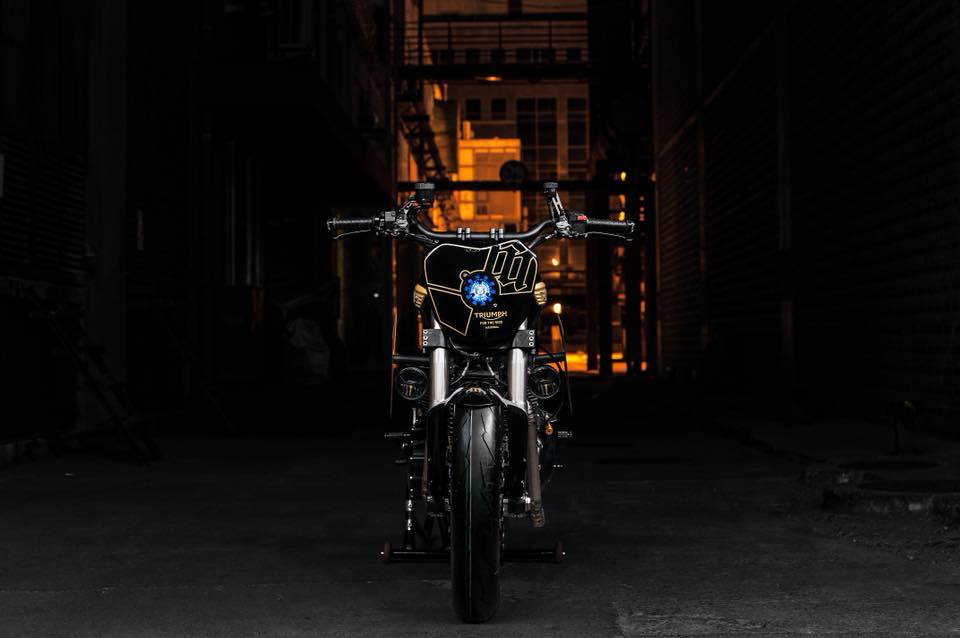 So, You have a front number board, that is taken from some retro racers or street trackers. With some custom shaping and pinstriping and distinctive logo, it looks medieval. The headlight is on the other hand – like from a sci-fi movie. Small, and powerful blue LED with custom internals looks like taken directly from Iron Man suit… and is complemented with the three stripe rear brake light. 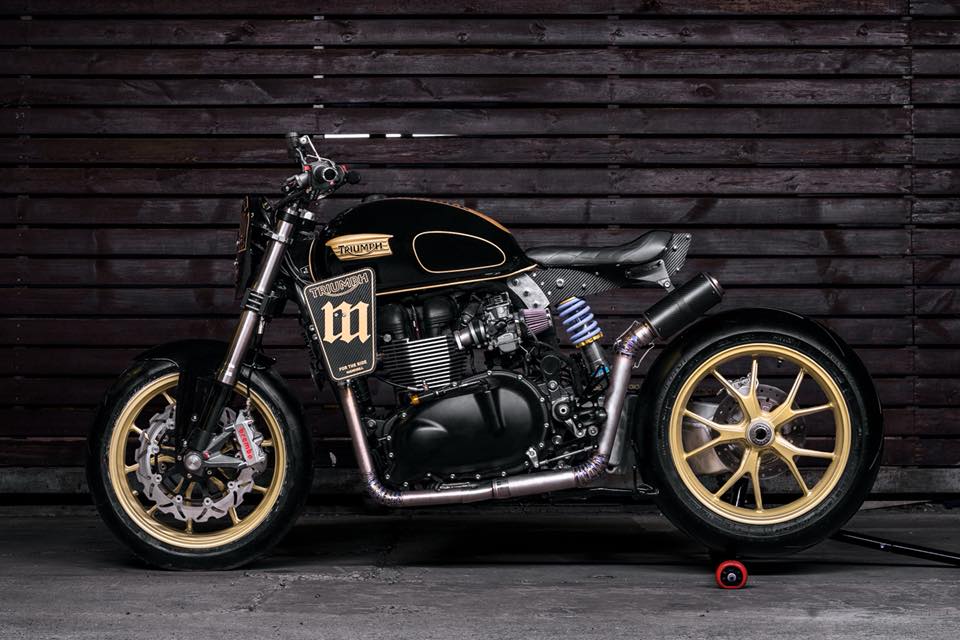 Moving backwards – side panels are made with carbon fibre. They cover two powerful yellow fog lights. The most significant changes are visible in the tail section. Apparently – the airbox was removed. The carbon fibre rear frame was designed, to accommodate a single seat (bobber element). 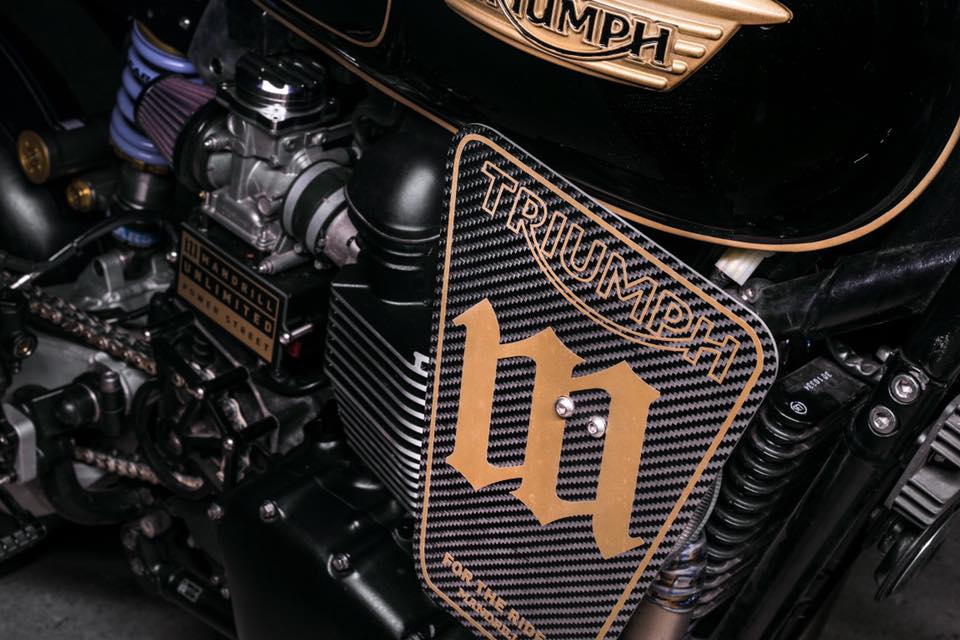 A single sided swing arm is taken from Ducati 1098 as well as the wheels and the front suspension and(sports bike parts). Triple clamps are custom made to keep the geometry in order. But the handlebar is taken straight from the motocross world.

It’s always the case with this 865cc twin cylinder engines – the exhaust pipes usually look fantastic. But this exhaust is my favourite part.

It’s a two into one custom made of titanium 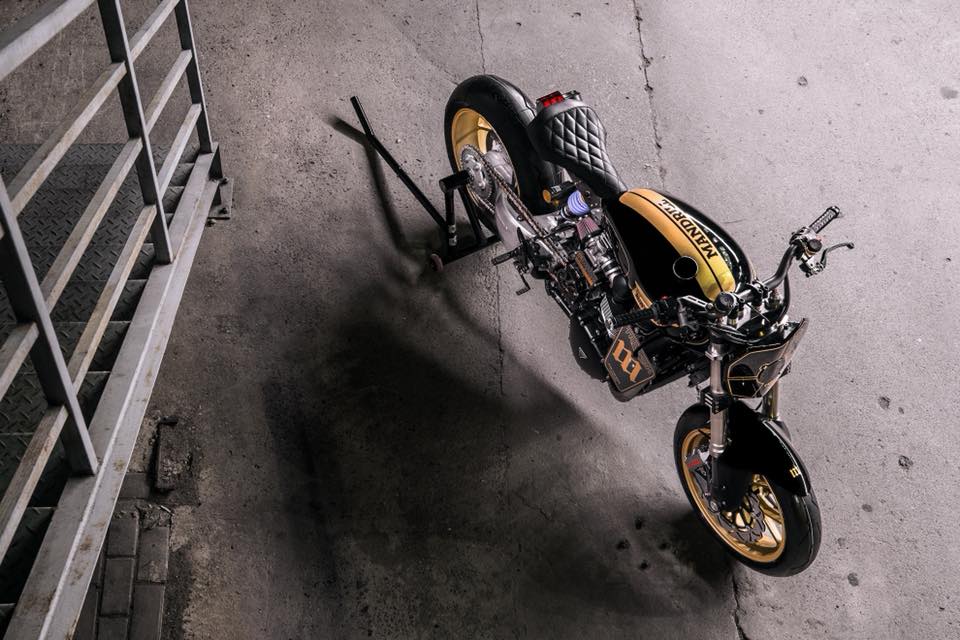 Shaped rather without much sophistication (straight lines and few bends) it provides a proper weight saving, and the welds look just amazing.

The battery and electrics were also modified, as there is a lot less room to hide them in. As always (isn’t it always the case recently?) Motogadget is on board: m-unit and digital speedo. 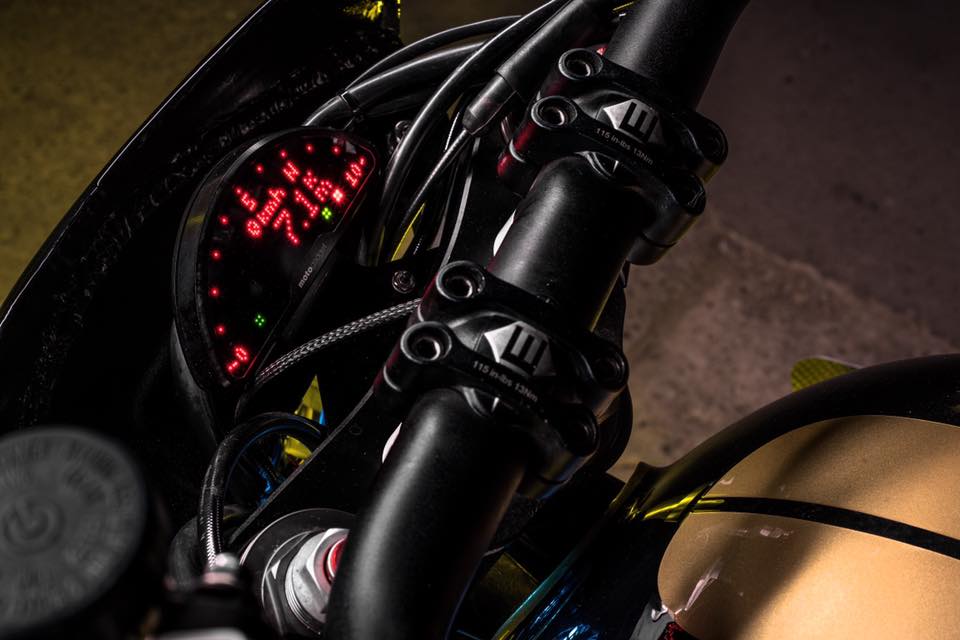 It’s nice to see that the projects from this Chinese workshop are becoming more and crazier. This is one brave T100 build. I’m looking forward to what comes after that! 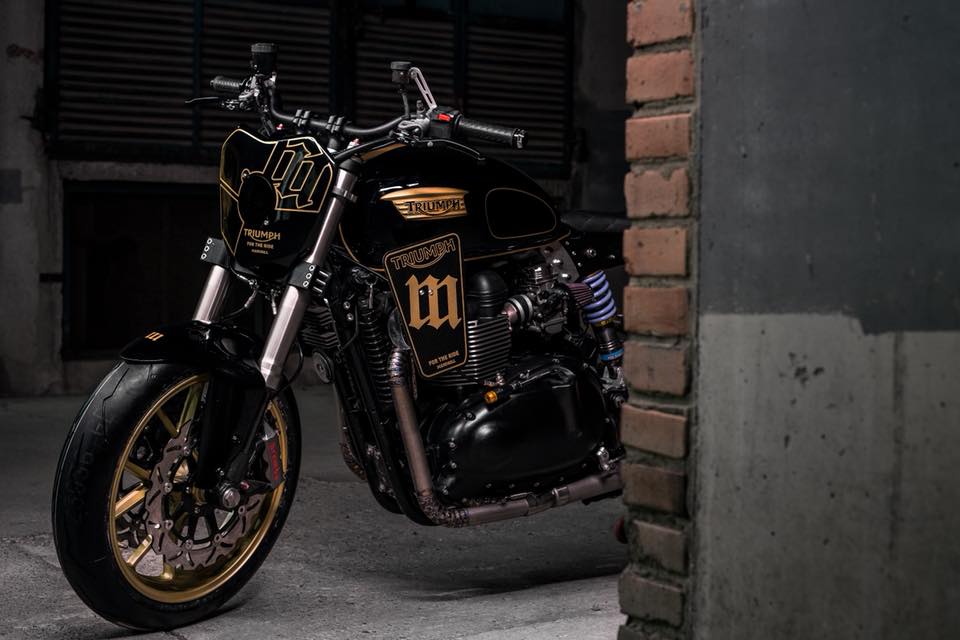 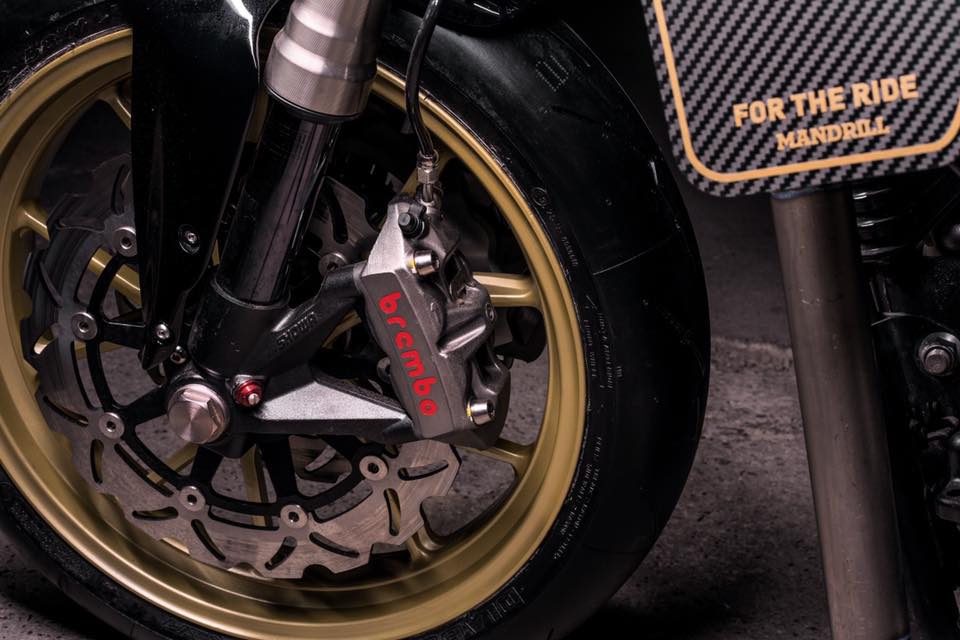 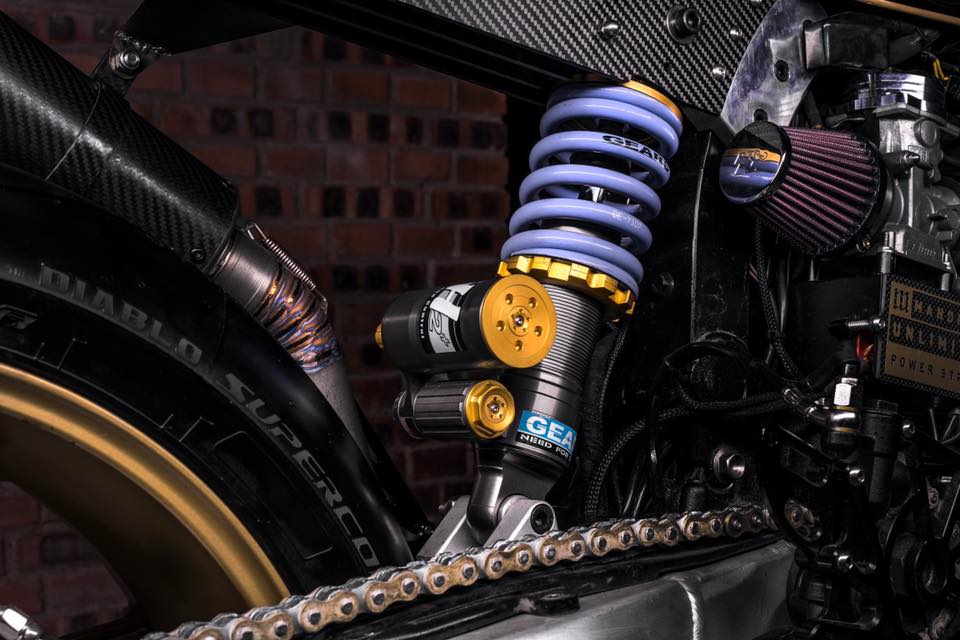 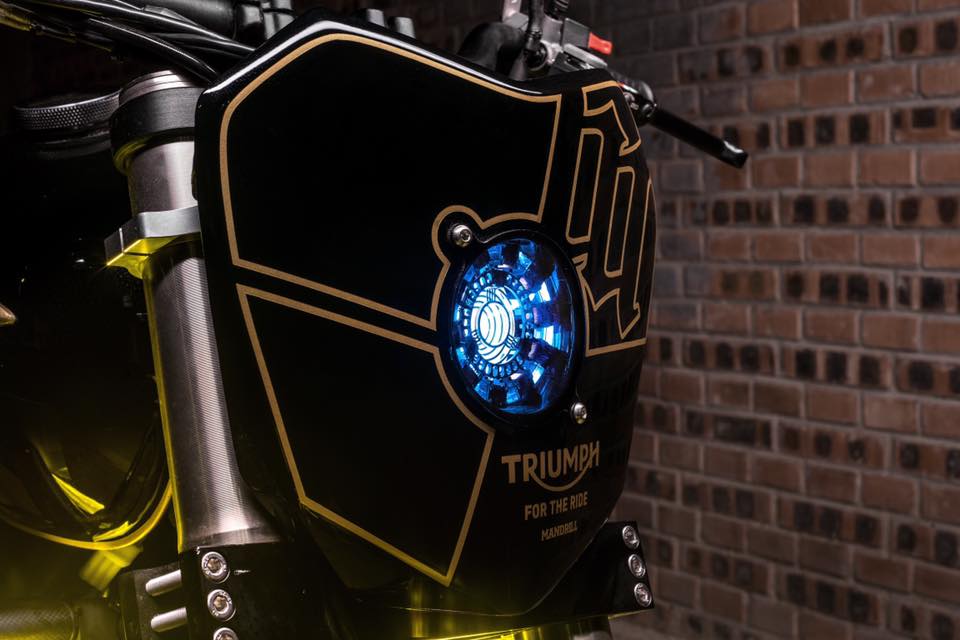 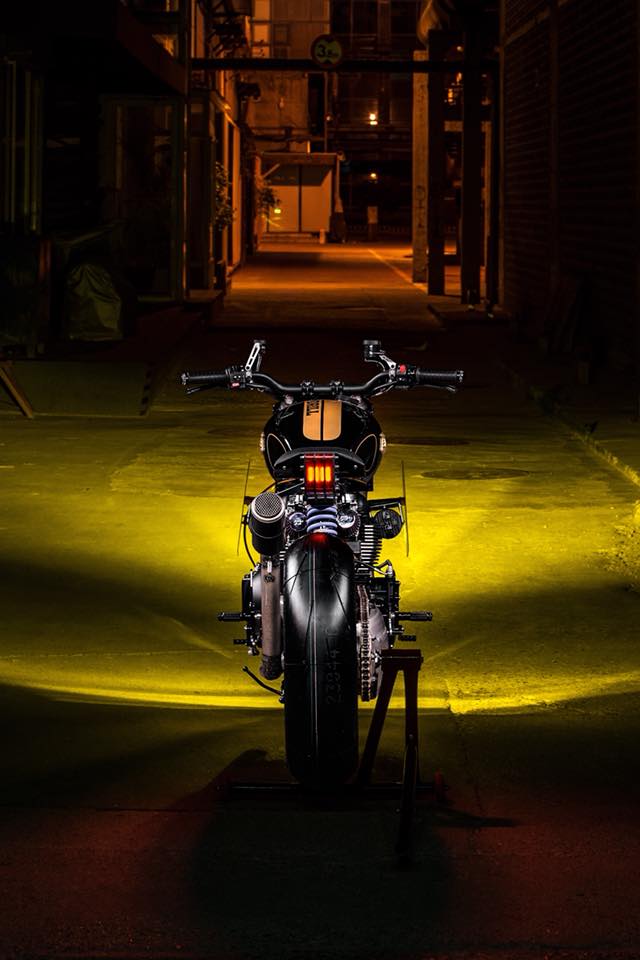