BMW K1200RS is not the first choice when You think about building a custom motorcycle. Well… Probably it’s not even in the top 50 donor bike models. This build comes with a story… about cooperation. Cooperation fueled by opposite styles and characters. About quite an accidental choice of a motorcycle model to customize, that caused the build to be more difficult than anticipated. But considering the brave and unique result – it was worth it. 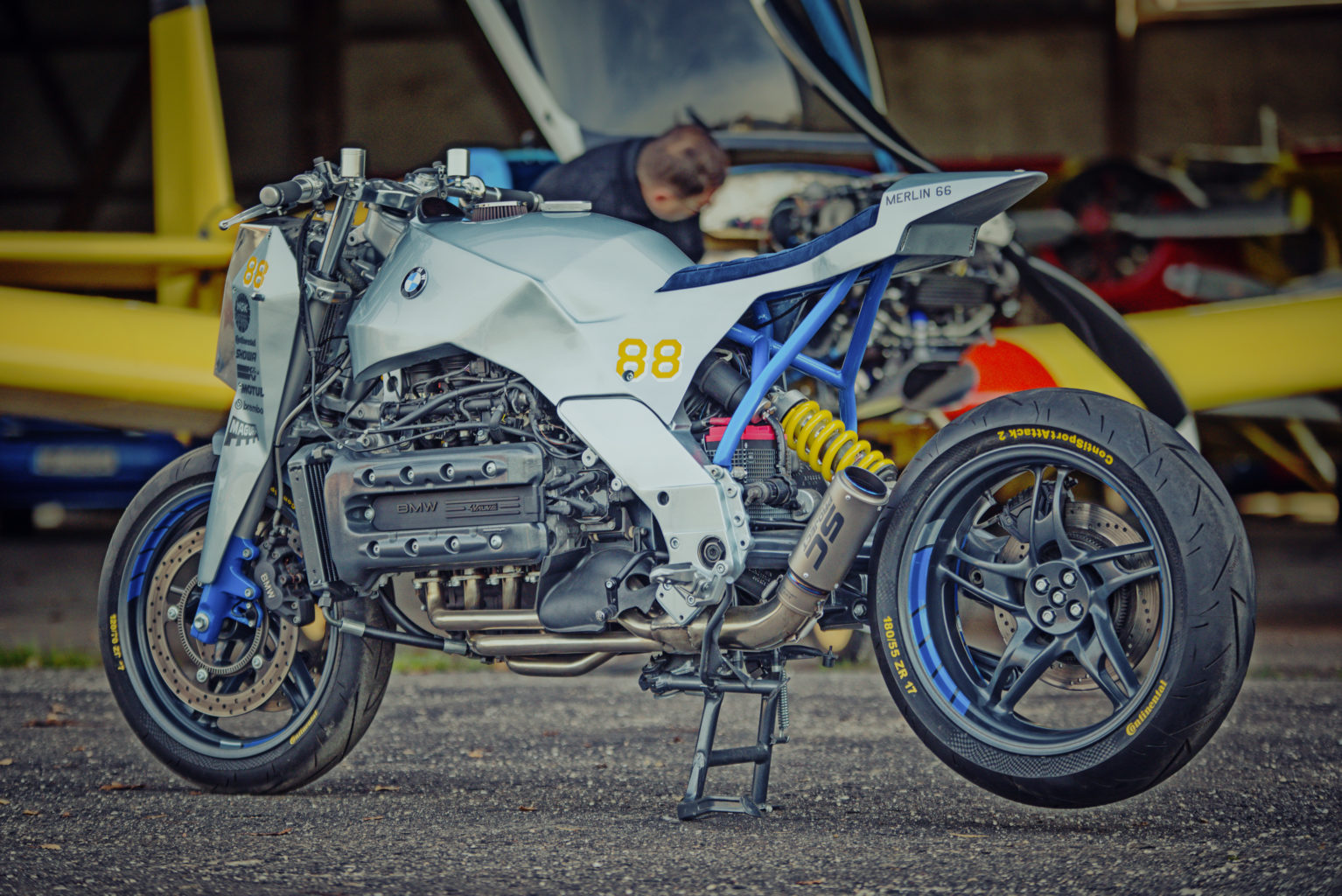 I had a chance to see this motorcycle in March 2018 and 2019, when it was displayed on the Warsaw Motorcycle Show. It was a “work in progress” then.. both years.

Now it is finally ready…

Jakub Beker from Ugly Motors, proved himself to be a capable builder. His motorcycles were featured all over the world. I featured them (here), as it is kind of a mission of this blog to promote Polish workshops. His style is “a traditional custom”. You can see his Inazuma or Virago builds. He teamed up with a friend who is:

More of a Bladerunner 2049 kind of a guy – jokes Jakub 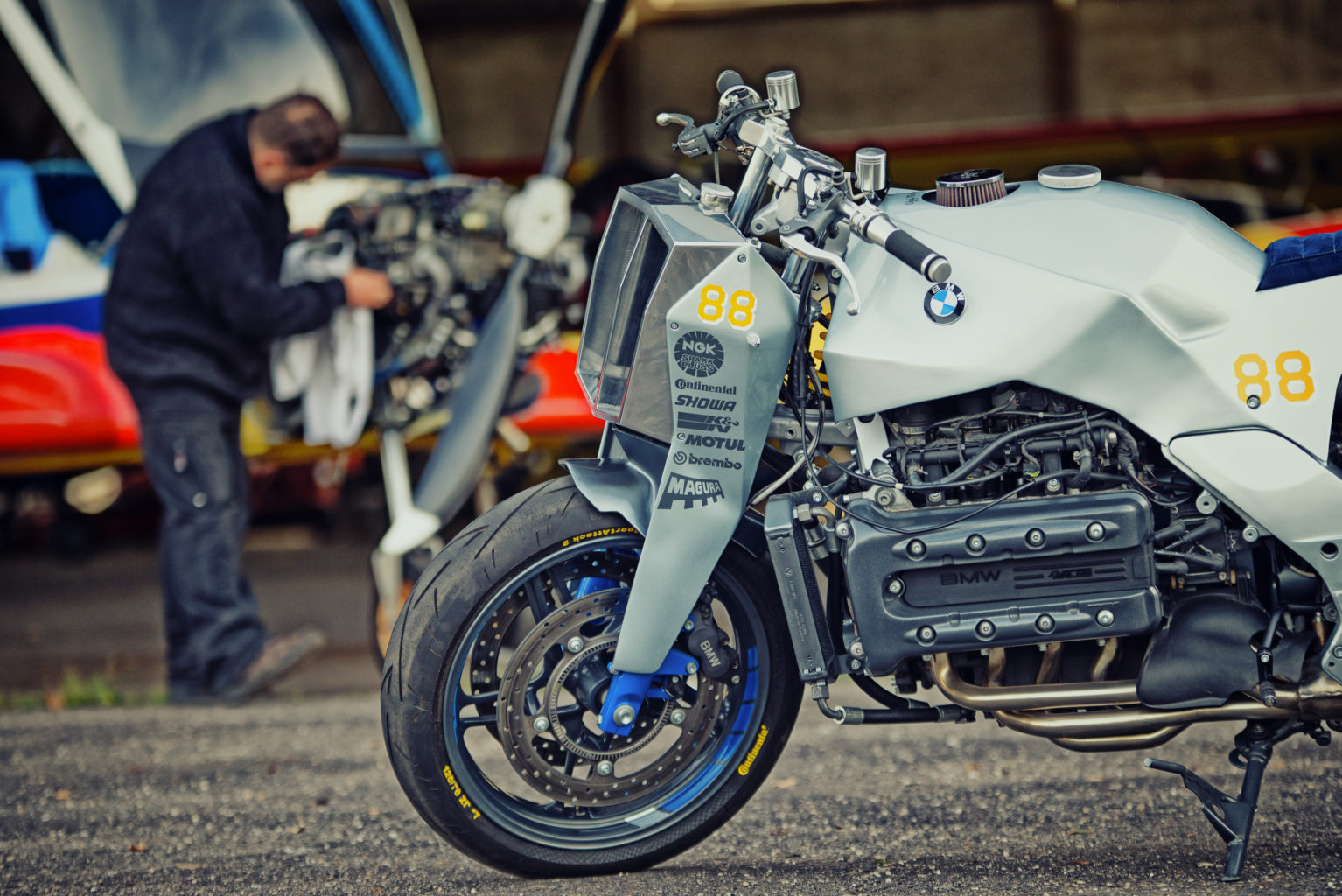 Together they created this individual piece of machinery… inspired by the legendary fighter plane: Mustang P51. That is quite an inspiration… I would definitely have chosen a British donor motorcycle for this kind of build… but hey, customizing is all about mixing styles and individual approaches. Probably this common denominator was the key factor that allowed these 2 personalities to work on the same goal – building this tribute motorcycle. 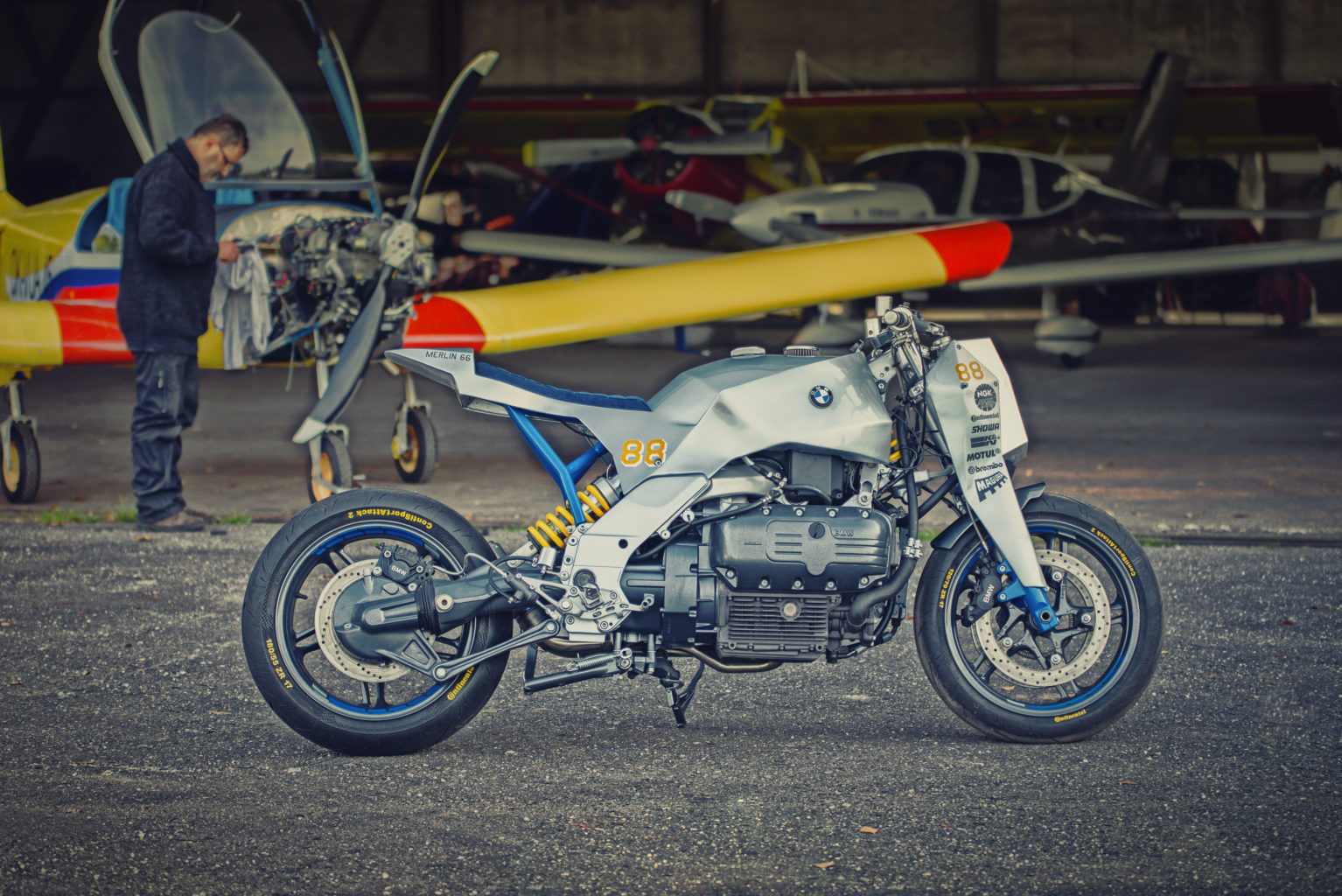 Originally they intended to build based on a BMW K100RS. But they failed to find a good quality donor bike. So instead of buying a neglected K100, they decided to go for a younger brother – K1200RS. Soon it turned out that it is not just a younger version of the same motorcycle, but there are serious differences between the generations. As “The brick” is pretty conventional regarding the frame and suspension. And the engine with dry clutch are well known to the mechanics and custom motorcycle builders. 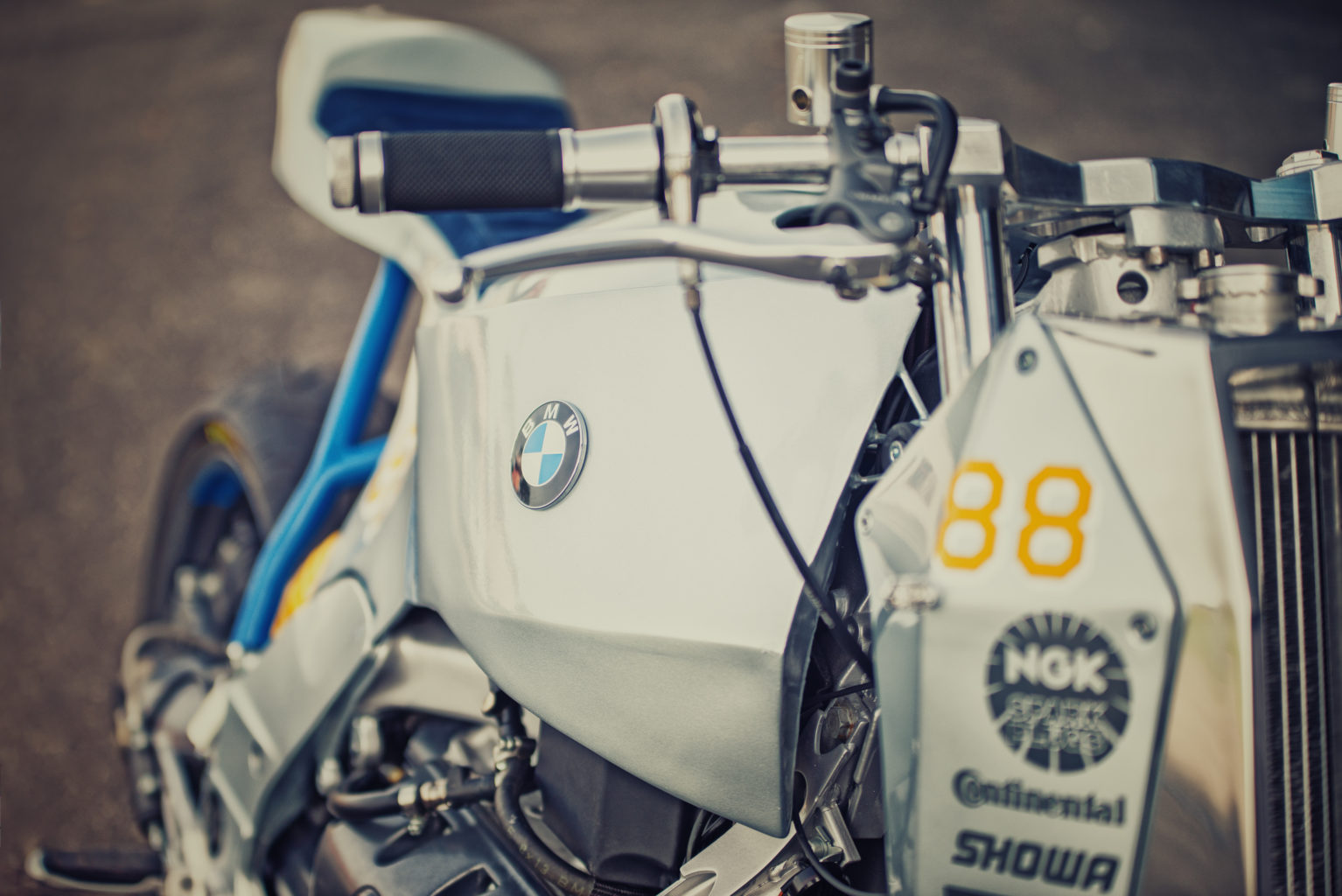 1200RS is a different machine

Besides the flat-four engine concept… Starting with tele-lever suspension, contemporary aluminium frame, very modern design that covers almost entirety of the construction… One thing these bikes have in common – is that they weight pretty much the same… as a little car. 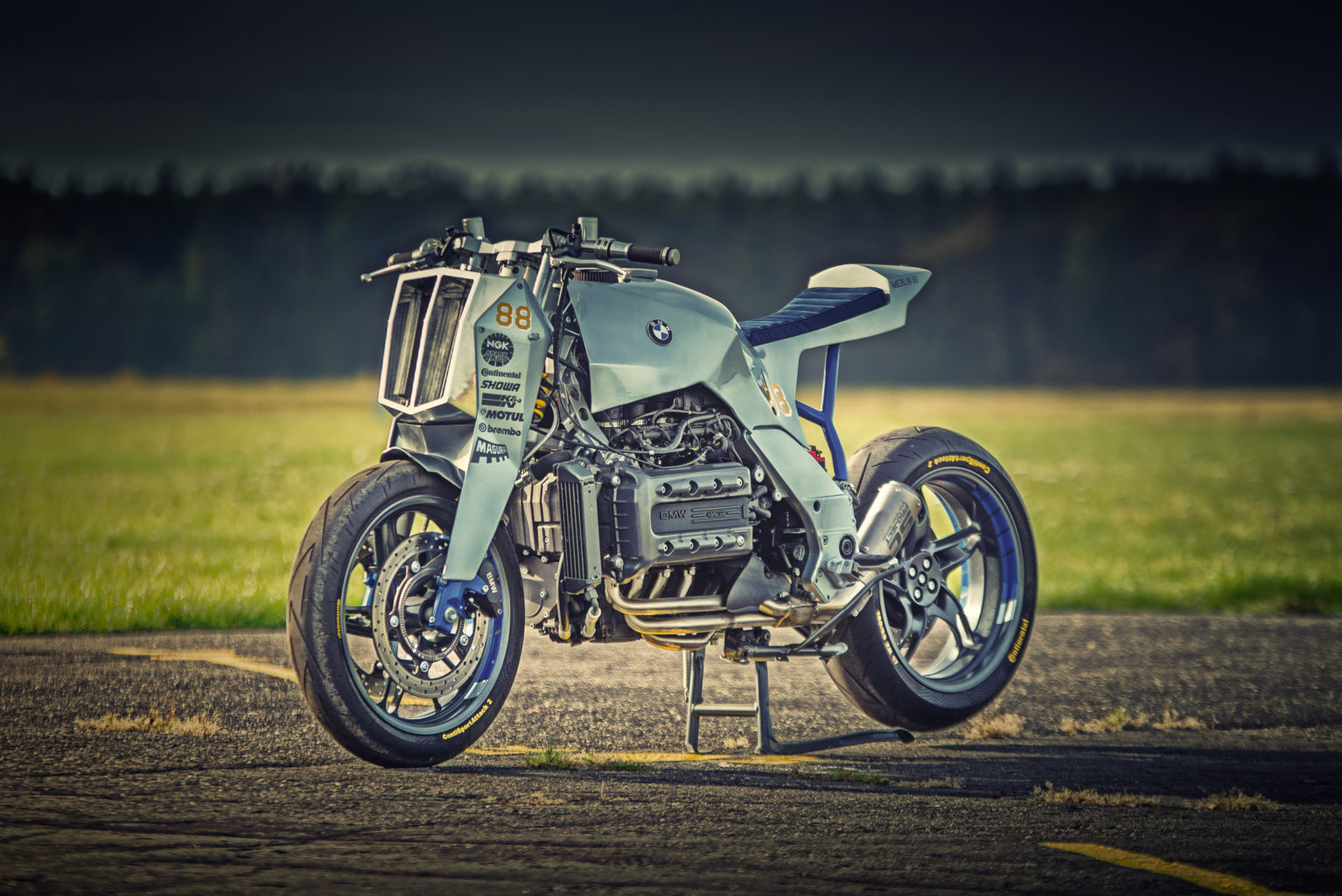 Soon it turned out that the famous wiring, that gives a headache to any builder who approaches to modify the K100 – in K1200RS got even more complicated. The build process started. 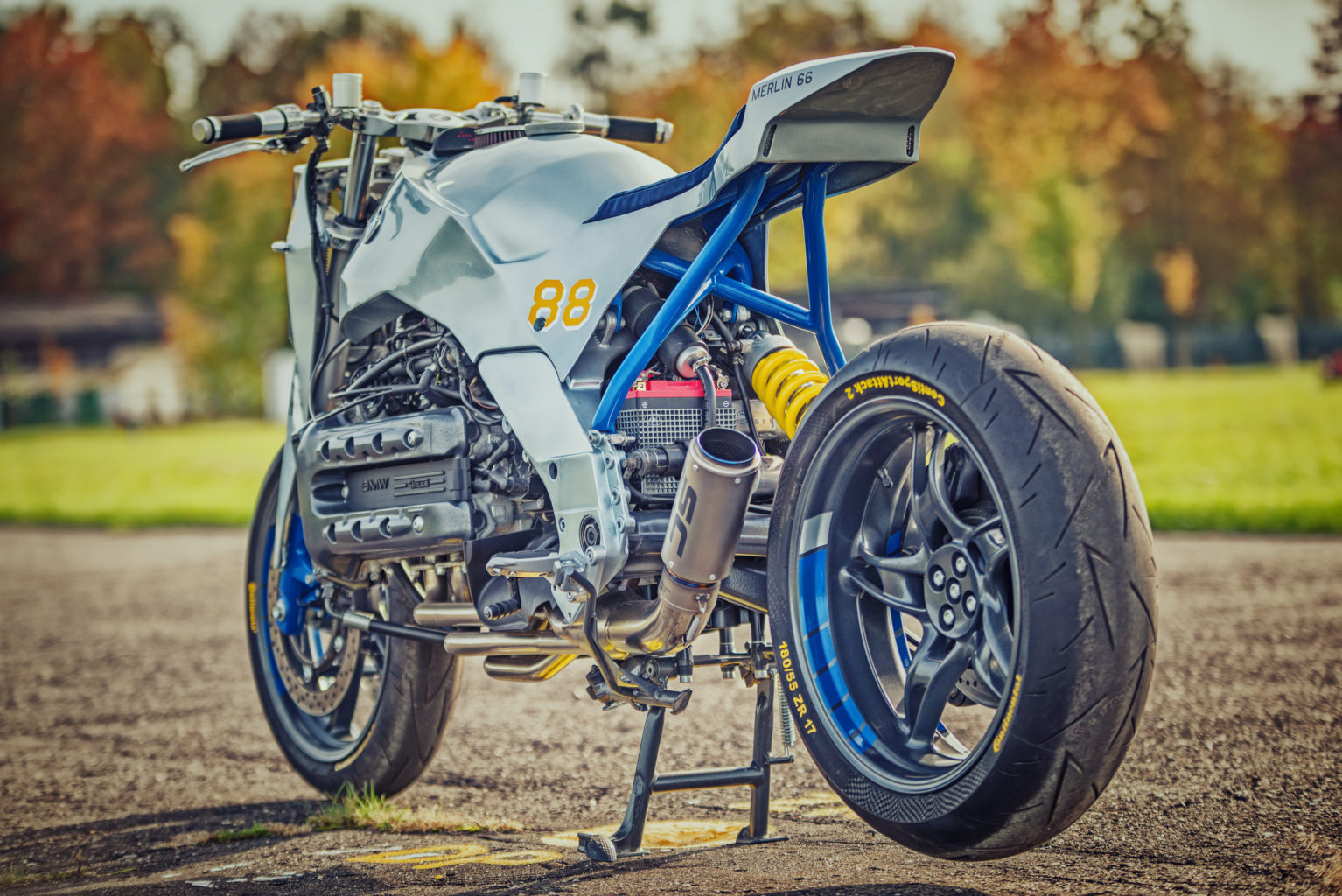 Guys decided to build a monocoque design (tank + tail) that would fit the modern aluminium backbone, from scratch Jakub created an outline of the bodywork by welding a mesh of 4mm metal rods. This structure was then wrapped with 0,8mm metal sheet. Considering the look of the final product, I bet that at least 3 (if not 4) digit manhours were put into the metal shaping process. The forks covered with these geometric metal sleeves blend smoothly into the tank, which then blends into a slim tail. All this creates a heavy front and aggressive look of the machine. It seems like it’s leaning forward even too much. 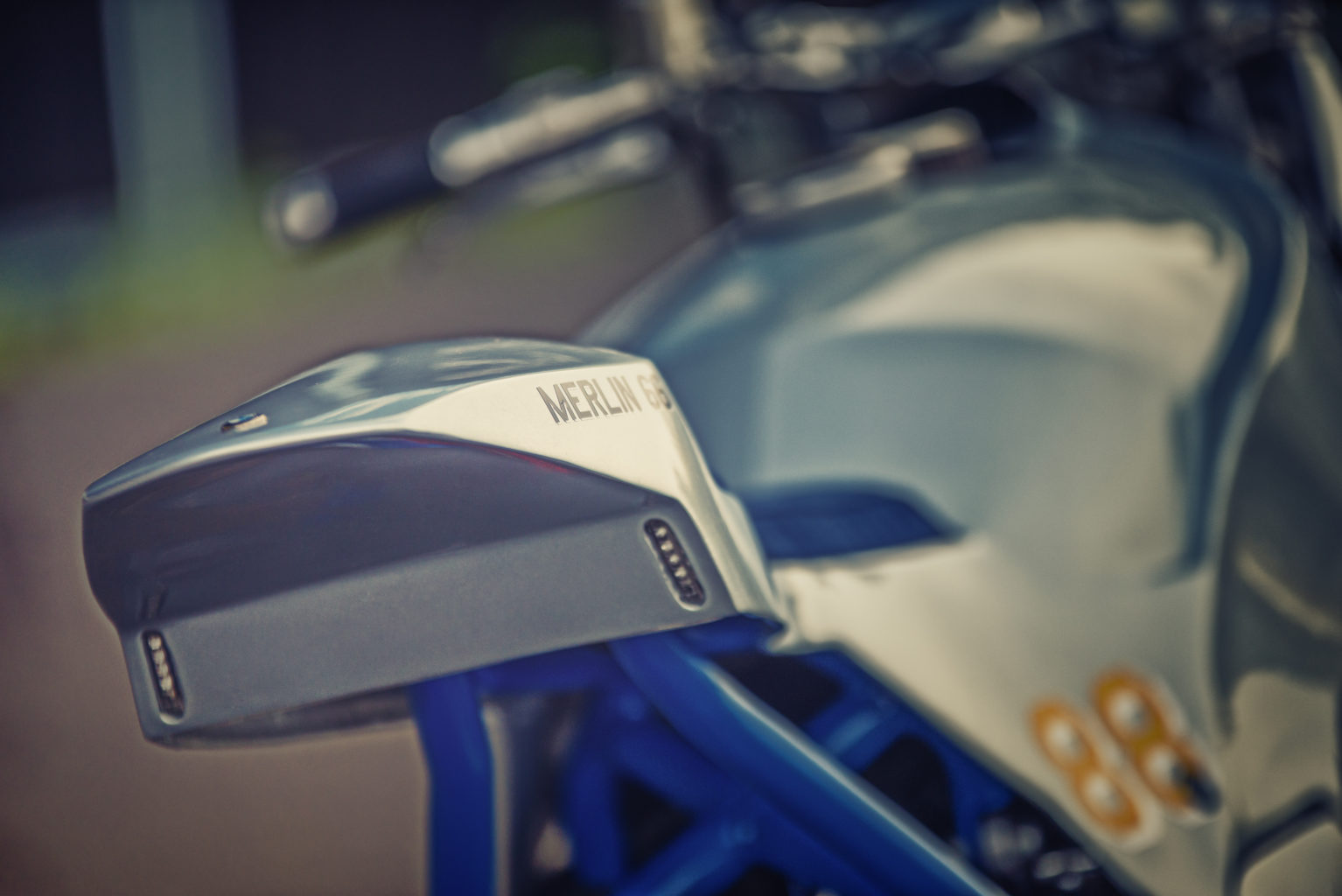 Taking the fork covers separately – they are a masterpiece on their own. Considering how much work was put into these 2 elements, makes You realize the scale of the whole project. But that is not all. The tank houses the K&N air filter (taken from a car, as none of the motorcycle designations wasn’t big enough) and most of the wiring. 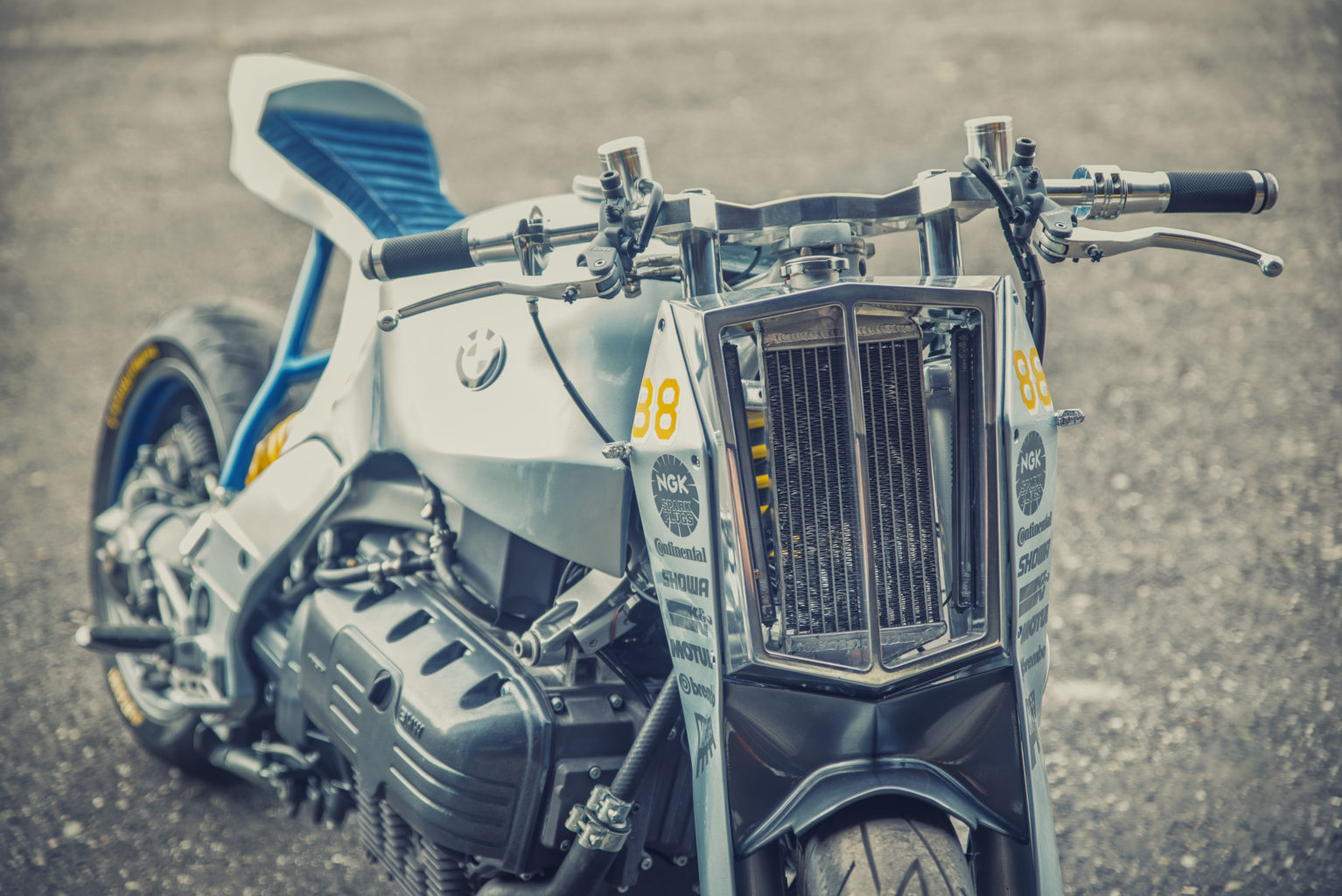 there is an aluminium housing for the vertical radiator. Since there was no room left for a conventional headlight – 2 LED strips were installed on the sides of the cooling central unit. The interesting part is that this “mini fairing” started as a 27 kgs piece of aluminium. A monolith that was CNC machined – instead of welding it from sheets of metal. The same technology was used to make the top triple clamp with the clip-on handlebars. 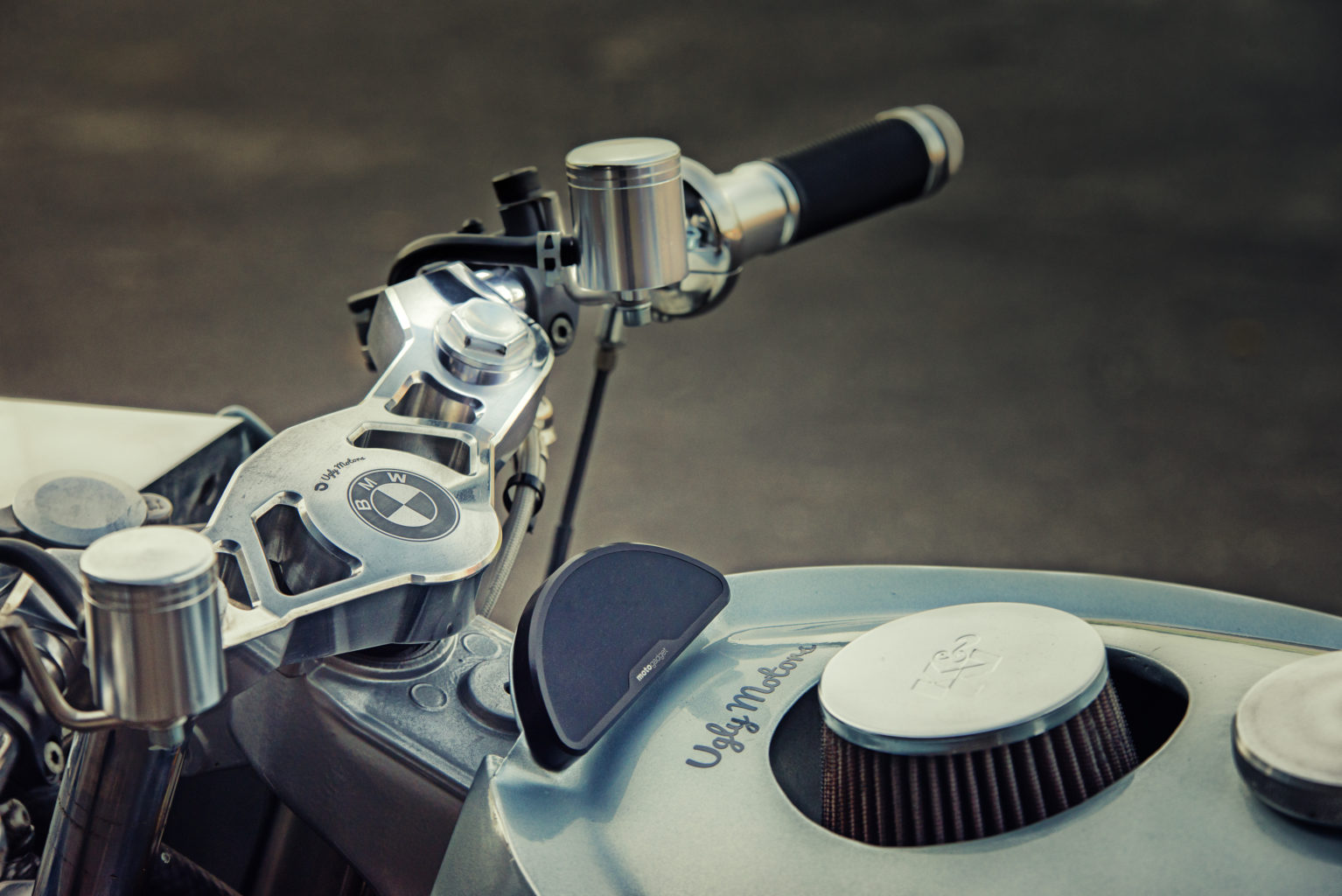 Regarding the wiring hell. Jakub decided to go with the legendary Motogadget M-Unit. Along came other “M” solutions… like keyless ignition (M-Lock) and M-button that covers the handlebar electrics with a single wire. Motoscope Pro sits in front of the rider on top of the tank. 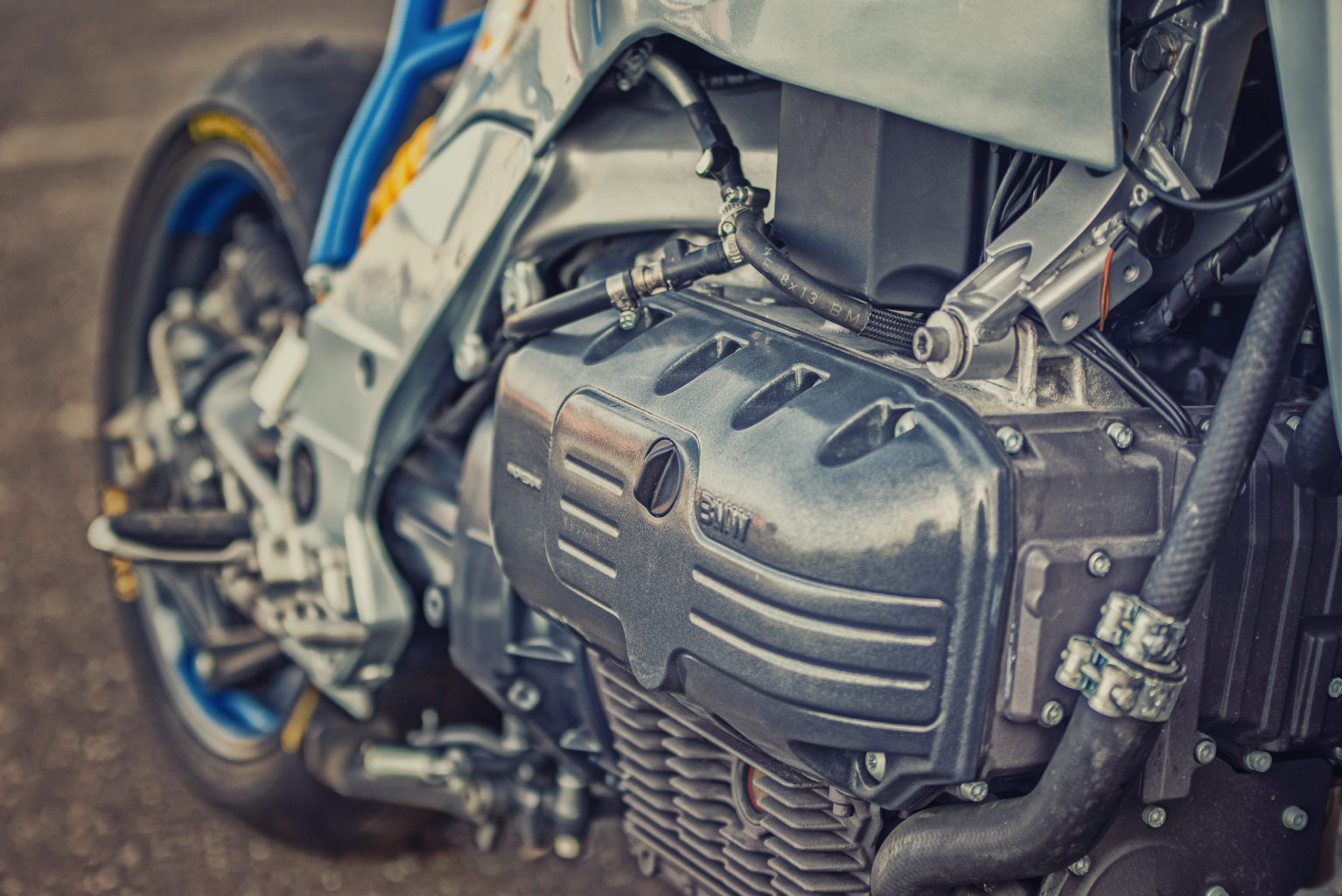 Stock it produces about 130 bhp. This was considered “enough”, so no major changes were made. For the engine to breathe better, the BMW got mentioned earlier performance air-filter and an SC-Project CR-T exhaust tip. 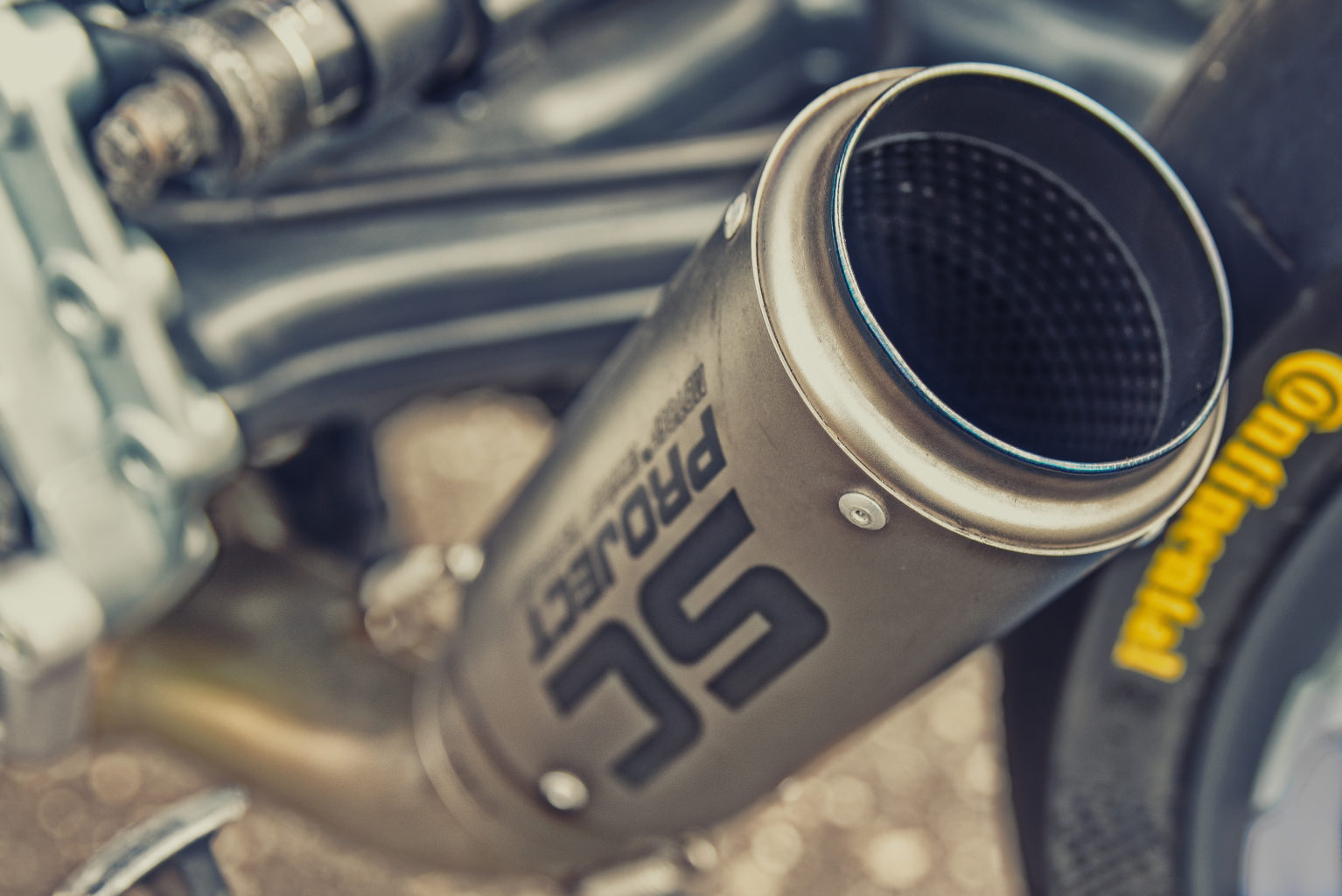 The paintwork was obviously inspired by the WW2 air-forces metal looks. BMW Silverstone Grey, with single graphics, applied here and there, match perfectly with the blue seat.

The result? Without a doubt a best looking K1200RS custom motorcycle of the world… so far. Anyone up for the challenge? 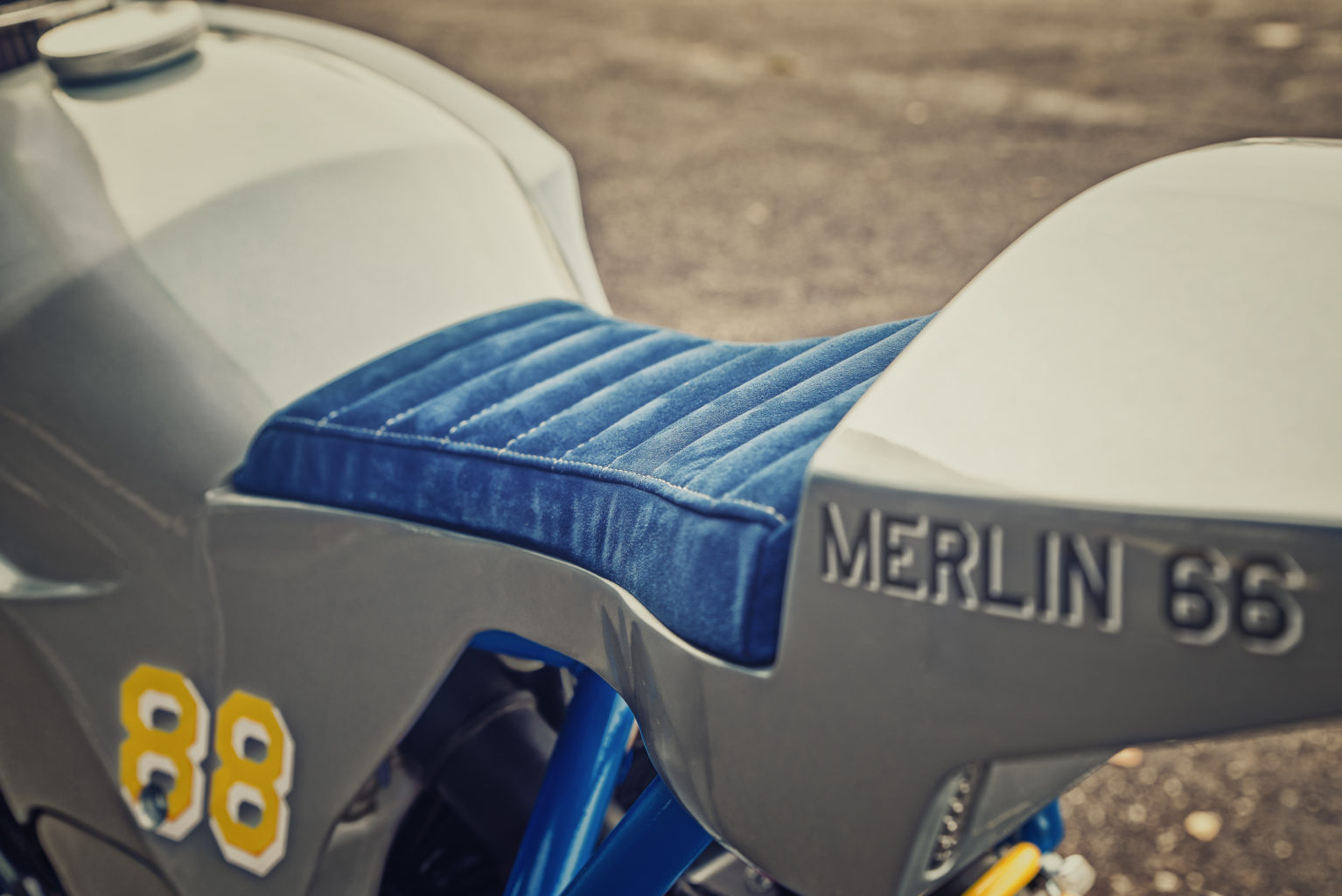 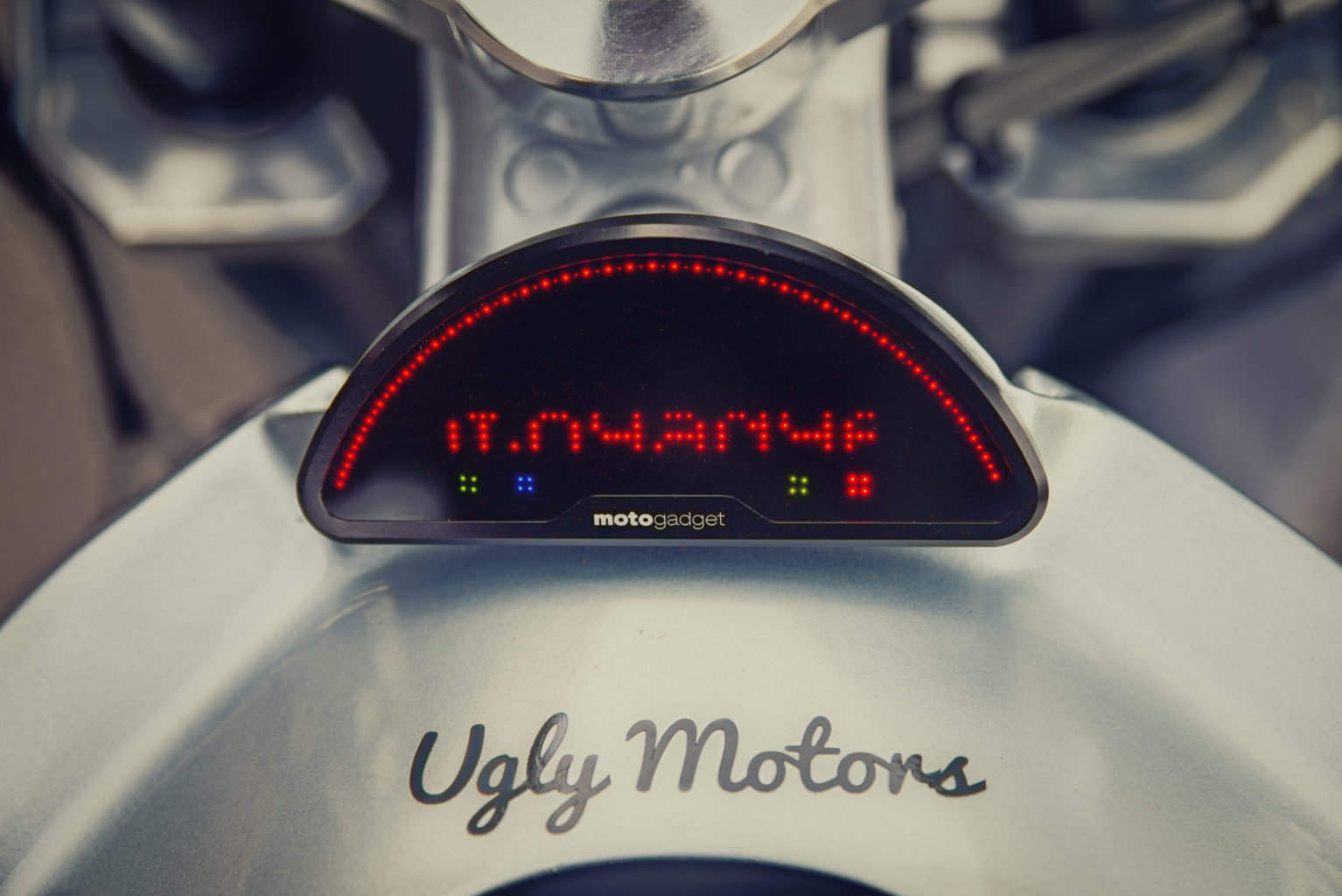